It looks like Xiaomi are gearing up to launch the new quad-core Xiaomi M2 very soon! How soon? How about in just 5 hours!

News is very much thin on the ground and this is still very much a rumor but sources close to Beijing based Xiaomi are stating that the company plan to officially announce their all new quad-core phone later today (2nd August 2012) at 10am!

There are no other details and this could all turn out to be false information but if this is true this could be the official start of the quad-core Chinese phone wars!

Up until now the only Chinese quad-core phone, and one of the most keenly priced quad-core phones available, has been the Meizu MX 4-core, but with the M2 and it’s rumored quad-core soon to arrive competition is soon going to hot up!

China’s most popular micro-blogging platform, Weibo, is full of expectation and rumors surrounding the next generation Xiaomi M2 with rumors circling not just about its feature set and specification but even the name, which could still be changed to Xiaomi MI2, Xiaomi M1+ or the Xiaomi M2. 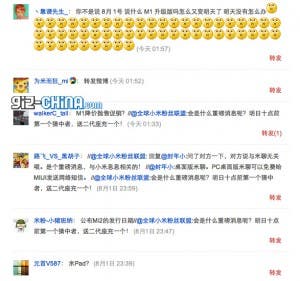 Xiaomi fans speculating on what could be announced today aren’t all so sure it will be the release of the M2. Some fans believe Xiaomi will announce Android Jelly Bean for the current M1, others suggest that Xiaomi might give details of a trade in deal for the M1 when upgrading to the M2, something which Meizu have been known to do in the past, while more far-fetched ideas even include a Xiaomi Pad or tablet to rival the iPad!

However, its the release of the Xiaomi M2 or at least firm details of its specification which get most Xiaomi fan’s vote for today’s anticipated announcement!

Xiaomi’s founder Lei Jun has been adding fuel to the fire too with recent Weibo tweets such as:

This cryptic tweet could be a hint at the new Xiaomi’s name which if my math is correct would be the M2, or he could be hinting at the power of the new Quad-core Xiaomi handset.

One of the longest standing rumors is that the new Xiaomi phone would be a super phone thanks to a super charged 2.5Ghz CPU! While other rumors have suggested the new phone could feature a 1.5ghz quad-core Tegra 3 unit, the 2.5ghx CPU chatter has continued.

While we still don’t know what to make of this rumor and the many others surrounding the next Xiaomi phone the great this is we only have a few hours to find out if it is true!

For more details and specifications of the Xiaomi M2 head over to our article;

Next App Controlled Off Road Buggy only $46