We all new that Zopo were working on a new flagship phone but we didn’t now what this new phone would look like or the specifications. Well that is until today when we received these first hands on photos and specification details!

The new Zopo phone is officially called the Zopo ZP950 and as you would expect from that name, it is the bigger brother of the current Zopo ZP900!

While we don’t have all the details yet, what we do know is the Zopo ZP950 is a 5.7 inch Android phone with a resolution of 1280 x 720. Unlike original rumours the new phone won’t be a quad-core device but instead a dual-core MT6577 unit with 1GB RAM. Like the ZP900 it will replace in the flagship role, the ZP950 also features a rear 8 mega-pixel camera, 2 mega-pixel front  camera and dual-sim support, but will come equipped with some nice updates including a larger battery and Android 4.1 Jelly Bean as standard. 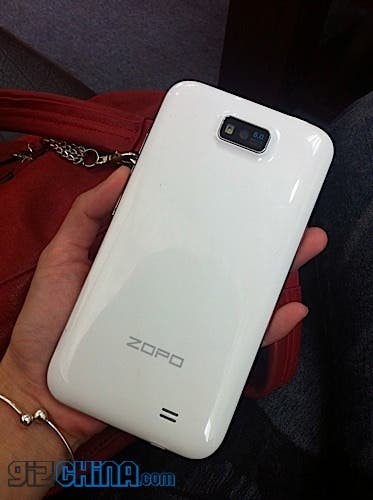 Our sources over at Zopomobileshop were nice enough to send over these photos and specifications, and inform us that they are preparing to list the ZP950 to buy very soon!

We’ll have more details and a full review of the 5.7 inch Zopo ZP950 once are review unit arrives!

Next Video: Meizu MX2 unboxing and hands on!