Chinese phone maker CoolPad are rumoured to be unveiling the new quad-core Coolpad 7295 at the Mobile World Congress with pre-sales beginning later today.

According to reports CoolPad will be holding a special event ahead of MWC tomorrow to officially launch their new 5-inch, MT6589 quad-core phone named the Coolpad 7295, but rather than waiting for the launch date the device is already available for pre-order!

The 7295 is available through Coolpad’s official Taobao store at a special introduction price of 1299 Yuan ($207), however Coolpad have cut a few corners to keep costs low. The 5-inch display isn’t a HD unit and instead offers a QHD resolution of 960 x 540, there is only 1GB RAM, and the rear camera is just a 5 mega-pixel sensor! 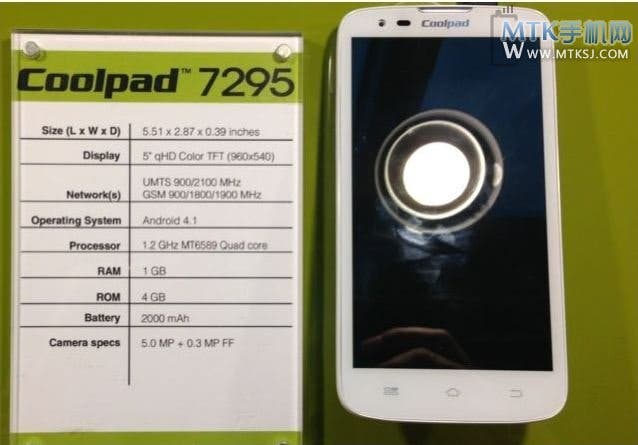 With that said though, the CoolPad 7295 is likely to be one of the few Chinese MT6589 equipped phones which will officially go on sale outside of China, and could still represent good value for money!