It’s no secret that Vivo are planning to launch a 5-inch full HD phone next month, and what else isn’t a secret is pretty much the whole specification as it has been leaked on Weibo!

Typically Vivo have launch phones which are very well made, offer some great features such as Cirrus Logic sound, but then be priced at astronomical sums of cash. The Vivo X1 is a great example as the phone costs 2500 Yuan ($400) but features just a dual-core MT6577 processor!

Thankfully it seems Vivo have taken a step back and attempted to price the new Vivo Xplay inline with its specification, however the rumoured price is still high at 3699 Yuan ($594) it’s also a little easy to justify.

According to this leaked specification spotted on Weibo, Vivo have dumped Mediatek in favour of a Qualcomm Snapdragon 600 quad-core with built-in Adreno 320 GPU, a good start! There will be 2GB RAM and 32GB of built-in memory, which is good as the 5-inch 1080 full HD display will be worth you loading up on games and movies.

Like most 5-inch flagship phones the rear camera is a 13 mega-pixel unit, however the front is a much more impressive 5-mega-pixel camera (something Vivo picked up from their friends at Oppo perhaps?). 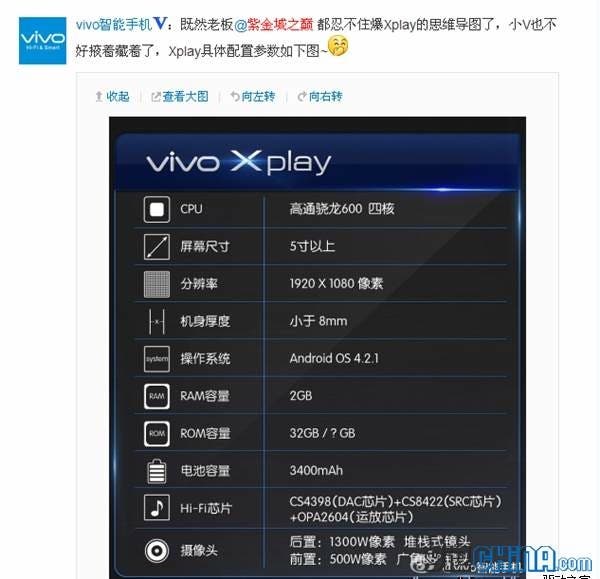 Even with the large battery, better than average front camera, DAC audio and full HD display, Vivo have managed to work their magic and have gotten the Xplay down to an impressive 8mm thick! If only they could work the same magic on the price!