The Zopo C3 is the 3rd Zopo phone to launch which offers a visually impressive 1080 display and powerful 1.5Ghz quad-core processor. Take a closer look at the C3 in out hands on photos!

From the specifications of the Zopo C3 found on line at Zopomobileshop.com, you might find it a little confusing as to what the differences are between this latest model, the Zopo C2 and the Zopo ZP980. 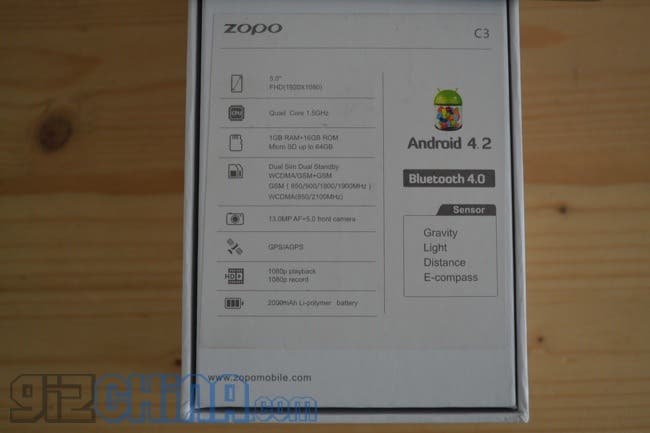 We’ll each phone boasts a 5-inch 1080 display with a resolution of 1920 x 1080, they all have an updated 1.5Ghz quad-core MT6589T Turbo processor and are available with 1GB RAM, and they all have 5 mega-pixel front and 13 mega-pixel rear cameras! So are they any differences?

From what we can see the major specification difference between the C2 and C3 is that the Zopo C3 doesn’t have a Gorilla Glass display, other than that the only other difference is the more rounded (and slightly more comfortable) design of the new C3.

Build quality of the this new model is as we have come to expect from Zopo phones. The fit and feel is all on par with similar phones, but unfortunately the chassis suffers from the same ease of bending as the C2 and ZP980.

The 1080 display is beautiful to behold and as good as the screens on the C2 and ZP980, and performance is comparible too as it is to be expected as each phone has the same hardware.

We’re currently uploading an unboxing video of the Zopo C3 and will post that later, along with a full review in the next week or so.

For more details or to buy the Zopo C3 head over to Zopomobileshop where they offer all Zopo models shipped directly from Europe!