Since the launch of the Xiaomi Hongmi, Chinese phone fans have been spoiled for choice when it comes to choosing an affordable phone with great specs. Now a new entrant attempts to topple the Hongmi from the top with higher level hardware and a lower price!

Xiaolajiao (which translates to Small Chili) have launched another great looking phone, with great specifications and at a wonderful low price of just $115 (698.50 Yuan here in China). The Red Hot Chili phone boats a level of hardware not normally seen at this low price, with a great looking, stylish design which doesn’t often follow such a wallet friendly price.

Full specifications of the Red Hot Chili phone are listed below, but the highlights are a 5-inch 720p display, dual SIM with support for TD-SCDMA and WCDMA, 13 mega-pixel rear camera, 5 mega-pixel front, and a quad-core 1.3Ghz MT6582 processor from Mediatek. 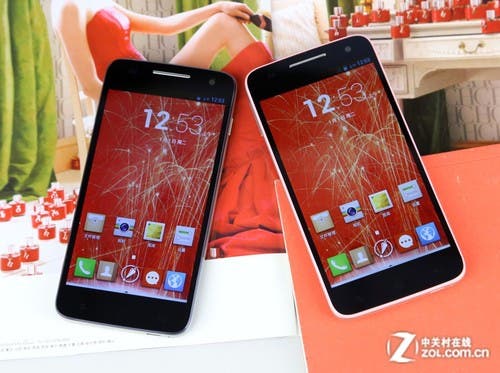 Today there are plenty of cost-effective sub 1000 Yuan smartphones on the market in China. Xiaomi m Huawei and Coolpad are just a few of the larger known brands who are aggressively tackling the market with low-cost phones with mid-range hardware. The latest to enter the battle field is the Small Pepper Red Hot Chili phone which packs a 5-inch HD display, 1.3Ghz quad-core processor, 13 mega-pixel rear camera and dual SIM support for just 698.50 Yuan! 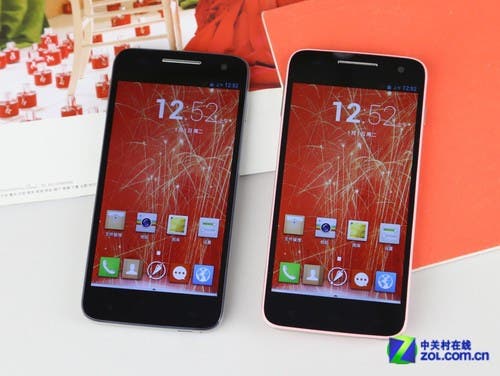 As usual only the China Mobile TD-SCDMA version of the phone is on sale at the moment, however the WCDMA model is listed on the official Xiaolajiao homepage and should go on sale soon. Other than the different network support the phones both have the same 1280 x 720 multi-touch display, 1.3Ghz Mediatek MT6582 processor, 1GB RAM, 4GB internal memory, 1900,Ah battery, 13 mega-pixel rear camera and 5 mega-pixel front. These are levels of hardware which would have been found on flagship devices not so long ago, so to see then on the Small Pepper is really a treat! 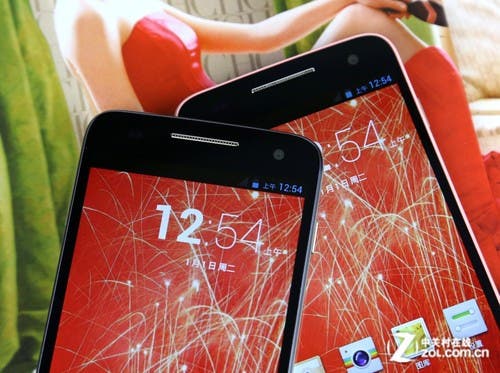 The 5 mega-pixel front camera on the phone has a wide 88 degree lens allowing you to get more in to your selfie photos than normally possible on similar priced phones. 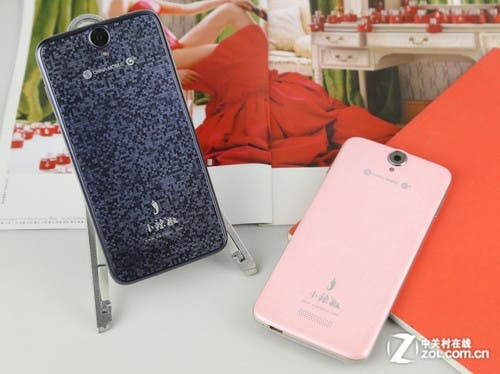 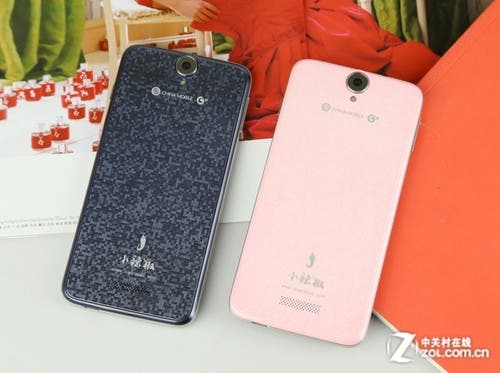 Although on the official website the Red Hot Chili pepper is shown in either a white of black colour option with holographic grid effect, there is also a pink version of the phone especially for the ladies. The grid effective is really a smart look for a low-cost phone, and makes if look much more costly than it actually is. A similar pattern can be seen on the UMi Cross phablet. 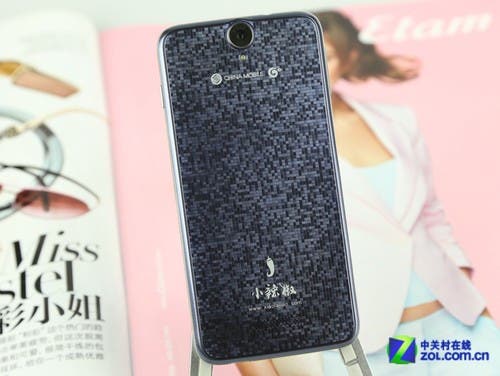 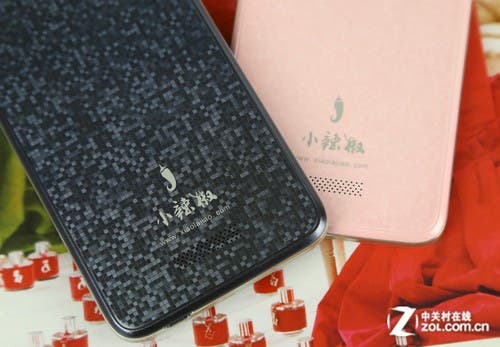 While we are taking a look at the rear we can also see the 13 mega-pixel main camera located top center with an LED flash just below it. Then the China Mobile logo which designates these versions of the phone as TD-SCDMA models (not suitable for use outside of China), and finally the Xiaolajiao logo and a speaker grill are located at the bottom. 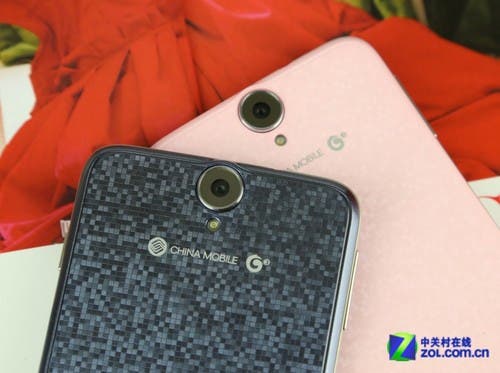 At under 700 yuan the 13 mega-pixel shooter with F2.2 aperture and Sapphire glass lens on the Red Hot Chili pepper is a great addition to a low-cost phone it is also good to have a bright LED flash on-board for use in low-light conditions. The camera app also has options to adjust the white balance, exposure and add life filters to enhance the look of your images. 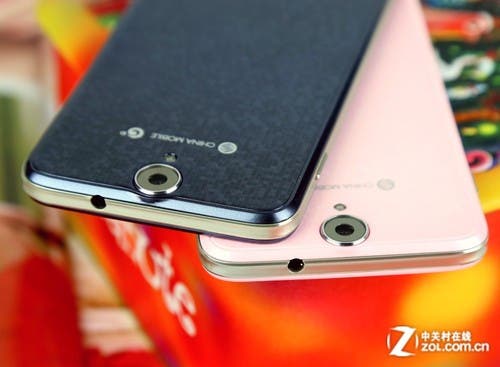 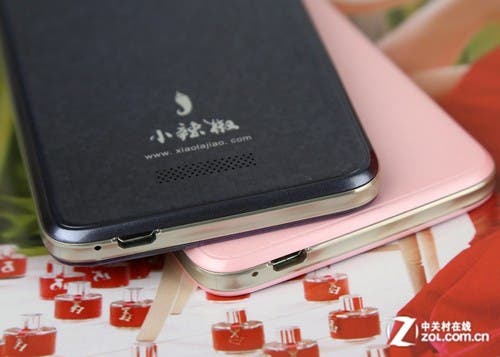 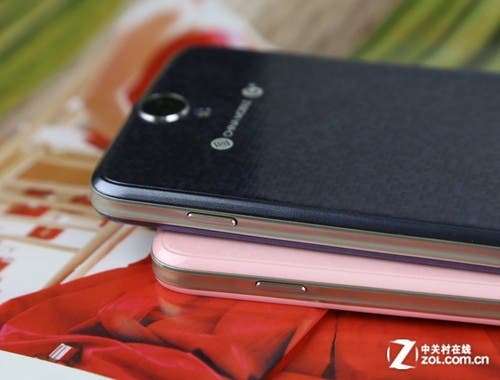 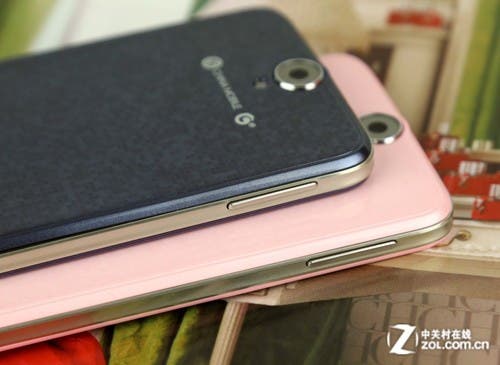 At the top with can find the 3.5mm headphone jack which pierces the 8.5mm body of the phone. A Micro USB for data transfer and charging can be found in the base, volume keys on the left and a power button on the right. 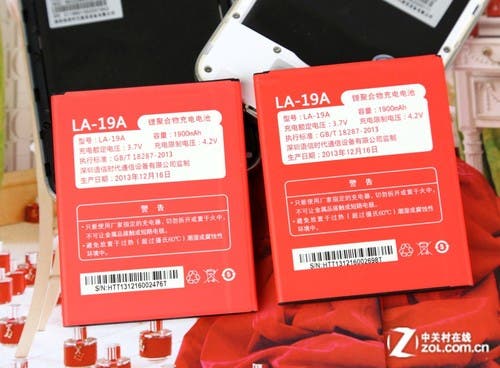 The only disappointing feature of the phone as a whole is the 1900mAh battery. While we haven’t tested the phone we would expect the battery to last quite well with the 720p display and energy-efficient 1.3 processor, still it is good to see that the rear panel can be easily taken off and a spare battery can be swapped in case of an emergency. 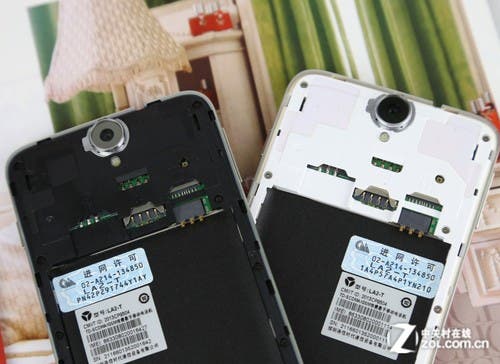 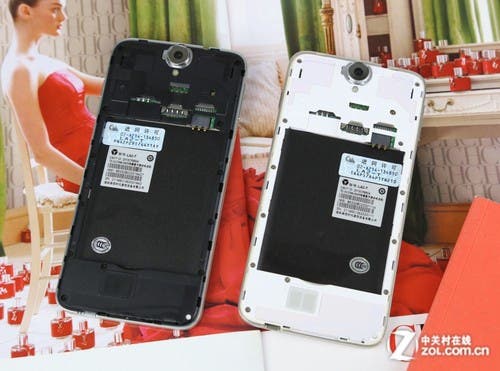 Removing the rear also gives access to the SD card memory slot and the dual- SIM card trays. A regular sim is used for GSM networks while a space-saving mini SIM tray is where you would insert your 3G card.

We await the arrival of the China Unicom version of the Red Hot Pepper, but even without our own hands on time with the phone we can see that the latest Small Pepper phone is going to be a great, affordable device to own in 2014.

Previous Archos to expand its range to include Windows phones