Before heading in to the full review there is an important point we must make. The Meizu m1 note isn’t currently available outside of China, so all the versions that have been sent for review are the TD versions of the phone meant to work only with China Mobile 3G and 4G LTE services. So the review below details everything except data and battery. This is a good reminder for any of you planning to import the m1 note, don’t do it yet, wait for the China Unicom or official international launch.

Also we do plan to post another review with the international version of the phone once it is released so keep your eyes peeled for that.

With the launch of the Meizu MX4 and Meizu MX4 Pro, we have seen Meizu move away from plastic to use alloy bodies in their higher end phones. The Meizu m1 note is designed to be a more affordable device, costing only $160 in China, and so some design changes had to be made. 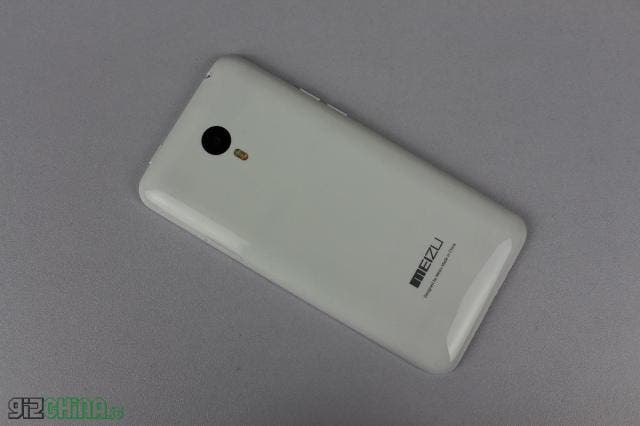 Rather than an alloy body with removable rear, the Meizu m1 note has a unibody polycarbonate shell that should only really be opened for repair. Meizu have given the plastic a glossy finish and slick coating to help prevent it from collecting fingerprint or marks.

The look of the phone is very similar to the previous generation Meizu MX3 (only larger), and although not metal the phone remains it’s up class premium feel and is surprisingly lightweight!

Internally the plastic shell hides all the components which are fastened to a lightweight magnesium chassis. The chassis helps to wick away heat and also keeps the weight down to just 145g, making the m1 note one of the lightest 5.5-inch phones on the market. 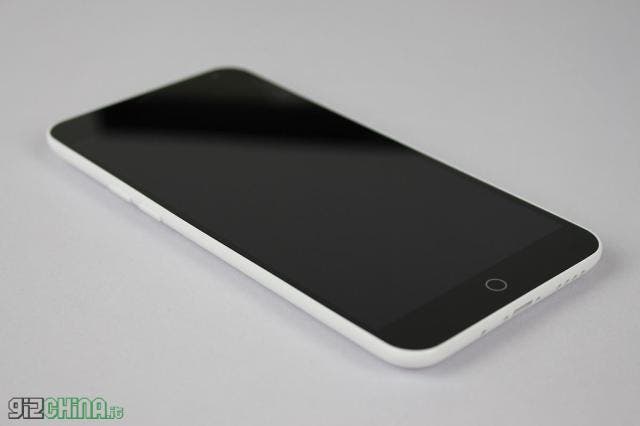 The 5.5-inch display gets narrow screen bezels for an overall size of 150 .7 x 75.2 z 8.9mm. In the hand the curved rear is very comfortable and feels much thinner than the dimensions might suggest. Personally I feel the Meizu m1 note is more comfortable to hold than the Meizu MX4 Pro.

In white the Meizu m1 note is a clean simple device that could suit anyone’s personality. For those of us who want to be more unique optional colours including yellow, pink, blue and green will eventually be made available. 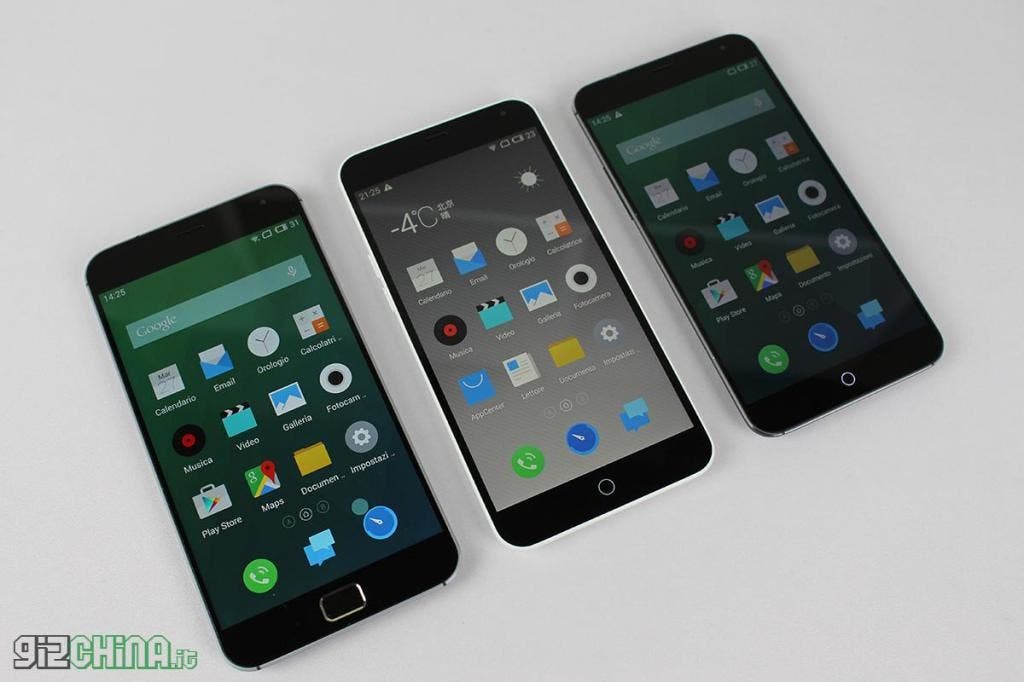 Going from the Meizu MX4, Pro, or even the MX2 is a familiar feeling with a similar overall design and physical buttons located in the same positions for each phone. The power button is on the top right, headphone jack top left and volume controls on the left side. This layout is exactly the same as the iPhone too, and if we look at the new volume controls, along with the plastic shell, there are a few design touches also found on the iPhone 5C.

As the shell isn’t meant to be removed a SIM tray is located on the right. The Meizu m1 note has dual 4G SIM slots, but no micro SD card space so you will have to make do with the built-in memory. Oddly the newer Meizu m1 has a single SD and room for a 128GB SD card, but so far doesn’t look like it will be officially launched outside of China. One thing we had noticed is the SIM tray top is a little loose, but after checking with Meizu this is actually a design feature, not a quality issue. 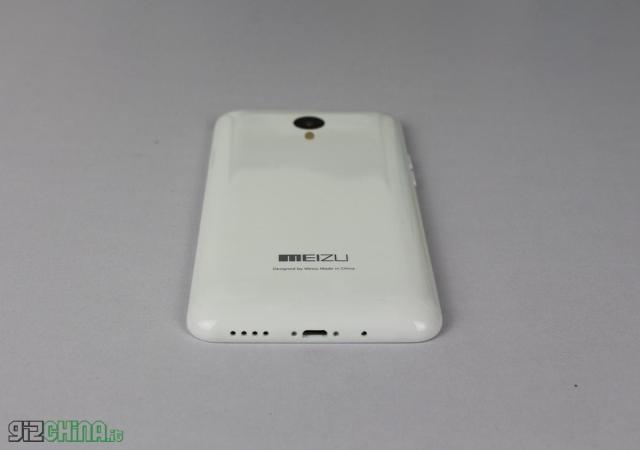 In the base we see a few more nods to the iPhone with a similar drilled speaker grill next to the mid mounted USB. 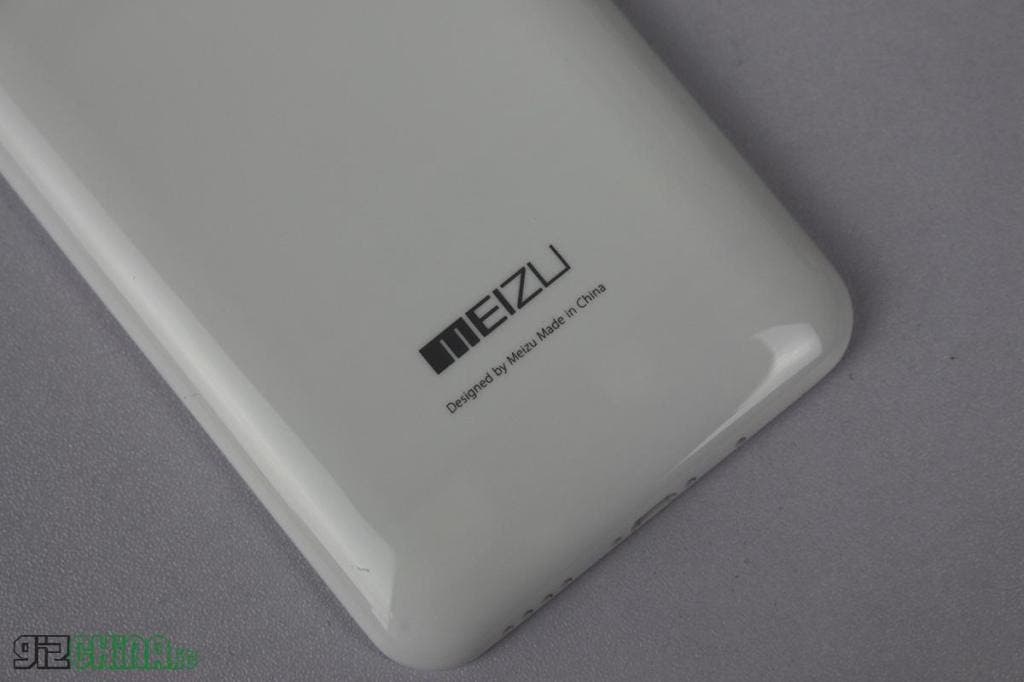 The rear of the Meizu m1 note looks just like a plastic version of the Meizu MX4 Pro. The logo is in the same position, we have a dual LED flash with dual tone bulbs plus a large glass lens around the rear camera. The rear camera specifications are different to the MX4 and MX4 Pro though, this sensor being a 13 mega-pixel model from Samsung with F2.2 aperture. 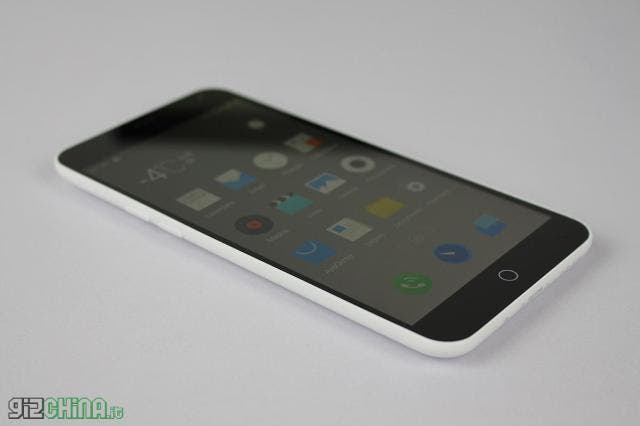 Turn the phone to face the front and we have a very traditional looking Meizu smartphone. There are no capacitive button for the back or menu options and instead only a single halo home button which features the same unique gesture controls as all Meizu phones.

The screen itself is a 5.5-inch Sharp panel with a resolution of 1920 x 1080. Above that is a 5 mega-pixel Omnivision camera, a big surprise as it is actually a higher spec front camera than the Meizu MX4. 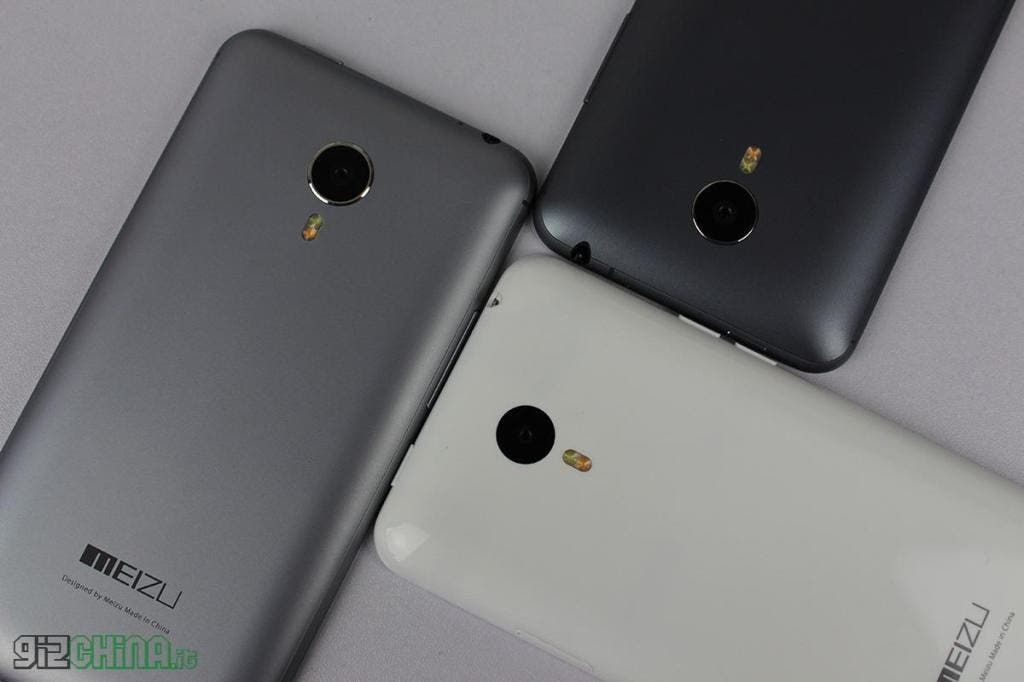 Overall the Meizu m1 note is a very comfortable and well made phone, so good in fact I’m not sure if Meizu might be cannibalising sales of the Meizu MX4 with its launch! 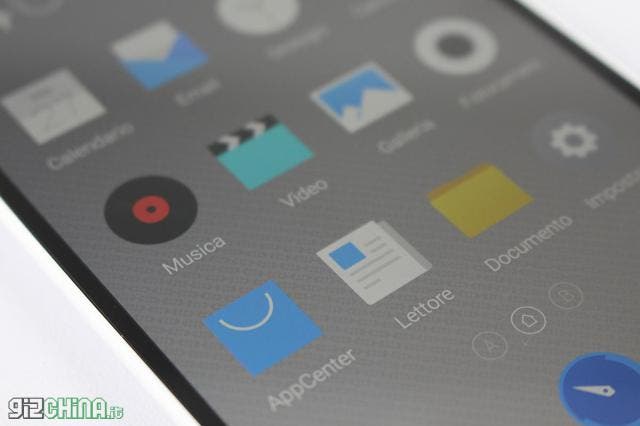 Being a display from one of the largest panel makers in the business it is safe to say that this is an amazing display offering accurate colours and amazing brightness.

If there is one issue we found is that the screen seems a little yellow at times. It’s not something that is immediately noticeable, and it was only noticed during scrutinising the display for the review, but there is a slight yellow tint there.

One of the most amazing things about the Meizu m1 note is that this is a low-cost phone, which ships with the same ROM as a flagship device. It is what Xiaomi have been offering to fans for the past few years and it is great to see more phone companies offer quality ROM’s at lower costs.

Flyme on this version of the Meizu m1 note is Flyme 4.2 and is based on Android 4.4.4 Kitkat. Basically if you have used Flyme 4 on any Meizu phone to date you are getting the same features here.

All those nice gesture controls that are found on the MX4 and MX4 Pro are included, as is the amazing camera application. The only major differences being that the ROM has settings for the dual SIM cards, and there is obviously no setting for the fingerprint scanner. Everything else though is the same as the Meizu MX4 Pro.

Recent Flyme ROMs have been much better than those of yesteryear. Not only are they more feature packed but they are also a lot smoother and more stable.

The Meizu m1 note was born at the correct time to be competing with flagship Mediatek phones from all brands. Like the JiaYu S3 we reviewed last week, the m1 note uses the latest octacore Mediatek chipset. The MT6752 processor in the m1 note is a 64bit SoC running at 1.7Ghz for all 8 cores. The phone also has 2GB RAM on tap. 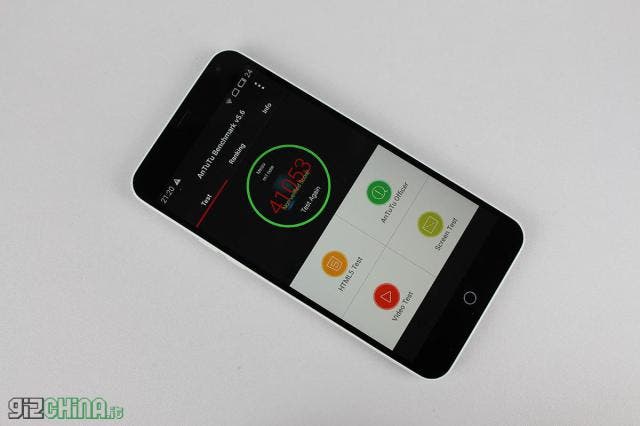 In benchmarks the performance of the Meizu is flawless, but more importantly the real world speed of the phone is right up there with flagship phones sporting more RAM and Snapdragon chipsets.

Even with the highly functional Flyme 4 ROM and Android 4.4.4 Kitkat the Meizu m1 note is a speedy phone, and out performs what it’s price tag might suggest.

When it comes to gaming the Mali T760 performs adequately and ran Real Racing 3 well. For a low-cost phone to offer this type of hardware and not suffer any lag, even when pushed, is a real joy. Developers are going to have to really push the envelope in terms of 3D gaming to really make the current generation of MT6752 phones sweat.

Although we were unable to test 3G and 4G data due to the reasons mentioned at the start of the review, we could test call quality, GPS and also audio.

Reception over 2G is excellent. There were no issues with dropped calls. The quality of the audio from the receiver if fine, nothing spectacular, just an average speaker offering clear audio.

Audio remains average through the single external speaker, but is better though a decent set of headphones. Unlike the Meizu MX4 and MX4 Pro the m1 note doesn’t get any fancy audio enhancements or HIFI chips.

So far every Mediatek MT6752 phone we have reviewed has great GPS performance, and the same can be said about the GPS on the Meizu m1 note. Lock on speed initially takes around 60 seconds with subsequent locks taking much less time. The GPS continues to be locked while driving around the city. A more thorough test with Google maps will be added in the full review of the international m1 note.

One of the largest differences between the Meizu m1 note and it’s more expensive counterparts is the 13 mega-pixel Samsung rear camera. Usually smartphone makers opt for a Sony sensor which are generally regarded as the better sensors to have. 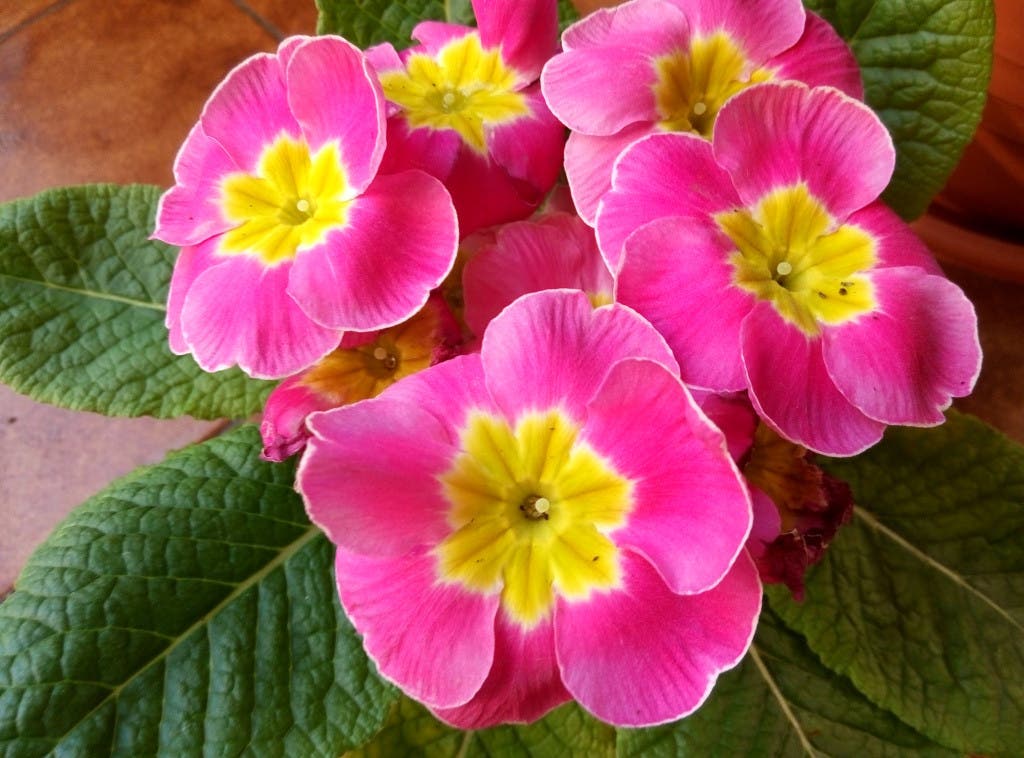 The Samsung sensor has an aperture size of F2.2, but when light isn’t available the dual tone LED flash on the rear more than makes up for the lower aperture size.

In daylight settings the 13 mega-pixel snapper does a great job of capturing images, and there is a nice depth to the photos too. Colour reporoduction is good with out being over saturated. 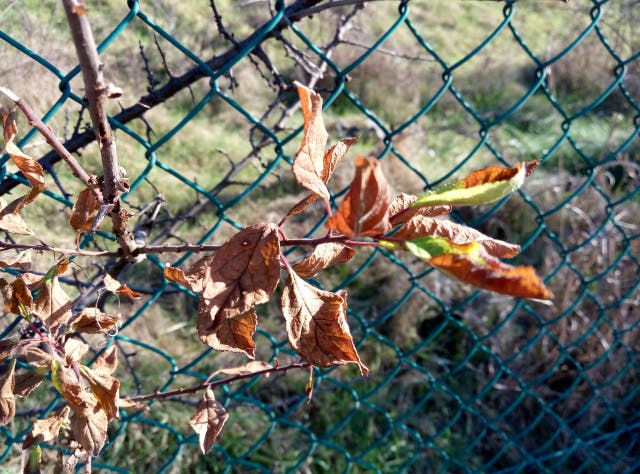 As the camera app on the m1 note is the same as the MX4 and MX4 Pro you also have a huge number of great features to choose from to get the most out of the sensor. Night mode in Flyme for example is especially good at picking out the light.

Photos taken in the normal mode without the flash turn out as well as you would expect a 13 mega-pixel F2.2 camera to. The choice of using either the manual settings, night mode or dual LED flash are options to reduce noise though and genually great photos are possible.

What we did notice from the Samsung sensor on the m1 note compared to the 20.7 mega-pixel on the MX4 and Pro, is that it seems a little more consistent meaning that you have a better idea of how your photos will turn out when you snap them. Although the MX4 and Pro are capable of better photos, you aren’t always guaranteed what the camera manages to capture.

Without being able to test the phone with either 3G or 4G data, we cannot comment on the battery life of the Meizu m1 note at this time. We will however review the international version once launched and add a comprensive battery test to that review.

What the Meizu m1 note offers is great hardware, and performance coupled with a comfy, lightweight and well made body. The 64bit Mediatek chip offers bags of power, and Flyme 4 really makes the most of what’s on tap. There is really nothing to complain about at this point other than the fact the interantioanl version of the phone hasn’t yet been released.

After using the Meizu m1 note side by side with the Meizu MX4 and MX4 Pro I am a little shocked. The phone is easily good enough to be a serious alternative to the MX4, and if Meizu ensure competitive international pricing then I am sure plenty more Meizu m1 notes are going to be sold than any other Meizu this year.

This review uses a collaboration of views from both Andi and Mario from GizChina.it. Once the Meizu m1 note is launched internationally it will be available through Meizumart.com, Meizu.it and Meizu’s Amazon store.

Next 4.6mm thick Gionee Elife S7 spotted in the flesh!