iOcean launched the MT6752 Rock earlier this year as a direct rival to the JiaYu S3, Ulefone Be Pro and Meizu m1 note. Find out how it really compares in our full iOcean MT6752 Rock Review.

I was quite lucky to try the iOcean MT6752 Rock before it was launched, in fact at the time I tried it it wasn’t even named. That early prototype had the same overall look as the production version, but not the same level of finish and detail the final model offers.

iOcean made some interesting design choices with the iOcean MT6752 Rock, one being to move the navigation controls from the chin of the phone to the screen, another to give the phone a ‘rock’ style finish on the rear, these might sound (and look) like odd choices but in the flesh it is quite refreshing when compared to the generic designs we have seen in the past. 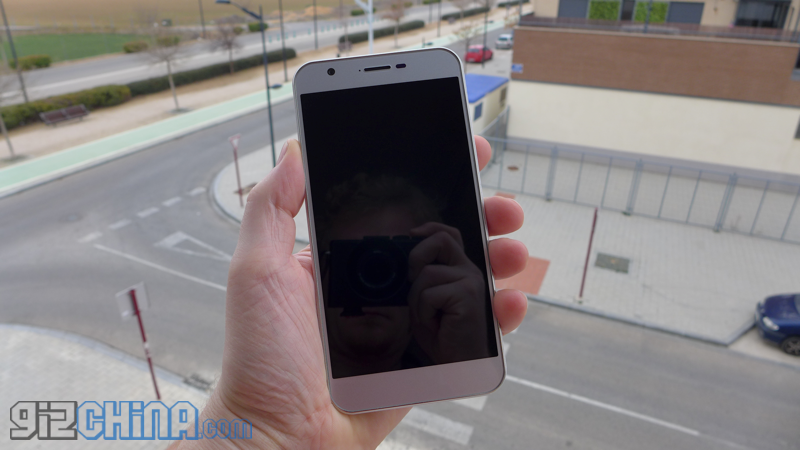 Beauty is in the eye of the beholder, this is a very true statement. What one person may like another is going to hate. Generally phone makers edge on the side of caution in their phones to ensure they sell the maximum number, but this has let to dull and reused designs.

It is very refreshing to see iOcean aren’t afraid of making something out of the ordinary, but the design is one that doesn’t appeal to everyone. Personally the MT6752 Rock design has grown on me and I quite like the quirky design choices. I like the fact the front panel is silver rather than white or black, I like the very rounded corners and the ‘rock’ style finish, and I also like the fact I can hold the phone securely in landscape without worrying about hitting any buttons (although I do feel the chin is still far too big). 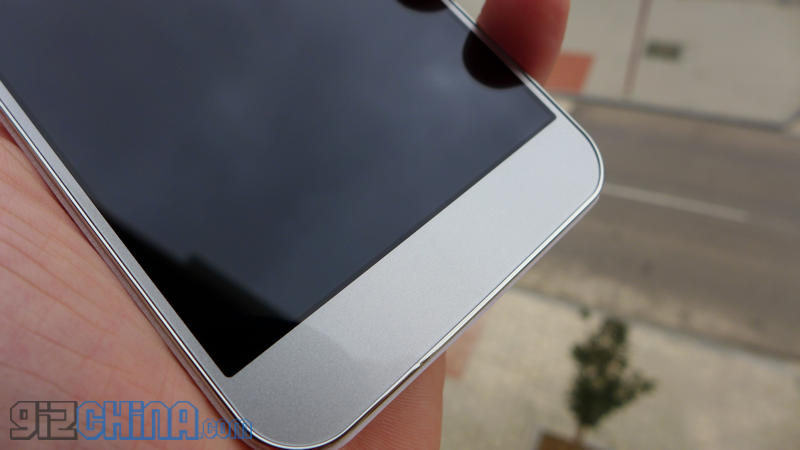 That’s not to say I love the design of the iOcean MT6752 Rock, I don’t, but I do enjoy it’s off the wall styling.

Other details I like about the phone are that iOcean have given the Rock a removable rear panel for a reason rather than out of habit (take note Meizu). Removing the rear of the phone (the shell wraps around the edges of the device) gives easy access to the 2300mAh battery, dual SIM cards slots and micro SD memory expansion port. 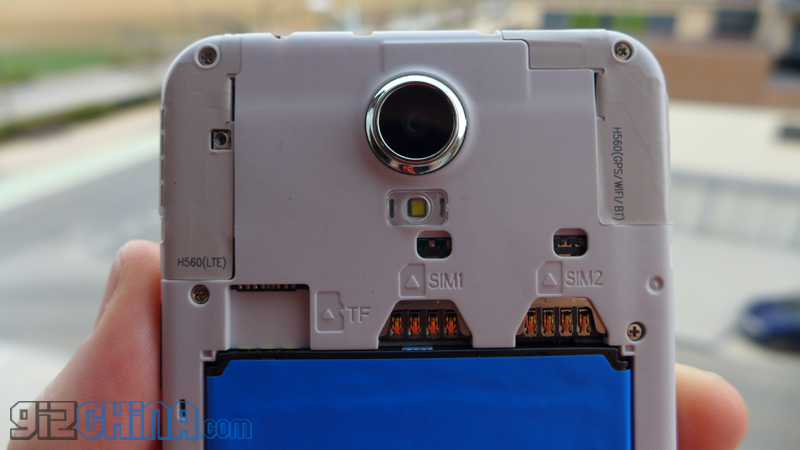 With the rear shell off we can also see the location of the antennas of the phone, with one particularly large antenna located right behind the chin of the phone partially explaining the size. 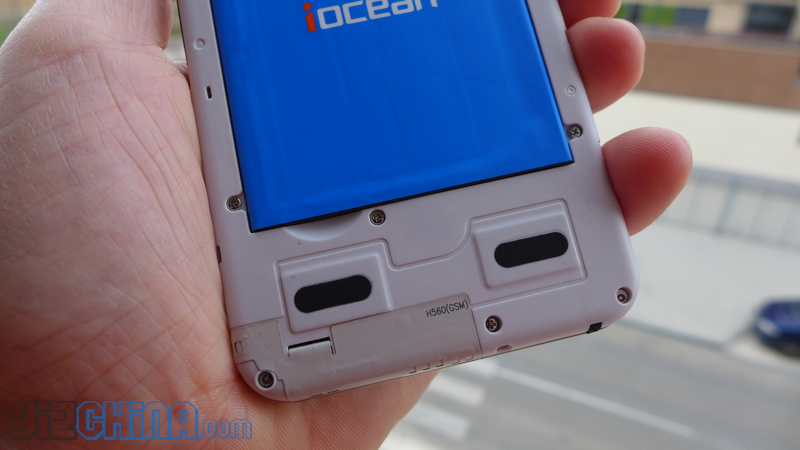 Place the rear back on and we see the 14 mega-pixel camera lens which protrudes slightly from the back, single LED flash, ‘iOcean’ logo and dual speakers, and yes they are actually dual speakers on the iOcean.

The sides of the Rock really swoop around to give a almost ‘pebble’ like design making it comfy to hold. If it were a pebble I’m sure it would make a great skipping stone for across a lake, but I wouldn’t suggest you try it. 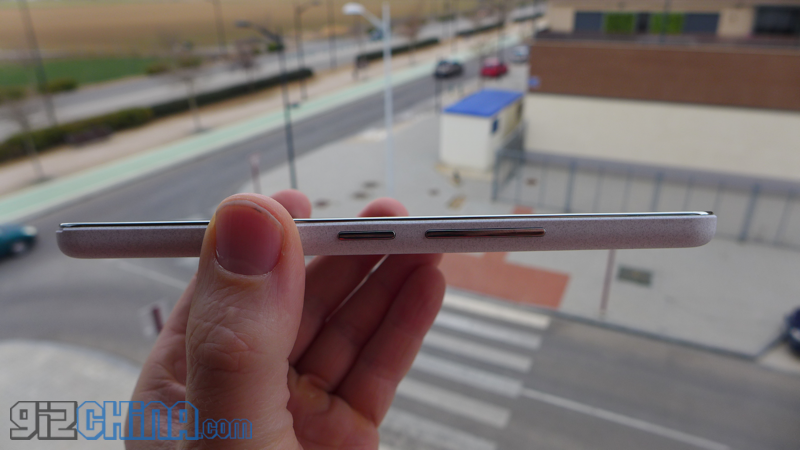 A power button and volume rocker and located almost mid way down the right hand side of the iOcean. I believe the lower than average location of the buttons have been designed so that smaller hands can access them easier on the larger 5.5-inch device. For myself though it means I am holding the phone lower than usual making it more difficult to reach apps at the top of the screen when using one-handed.

Touring the last 3 sides of the phone we find a 3.5mm headphone jack at the top, USB in the base while the left hand side is free of any button, tray or control. 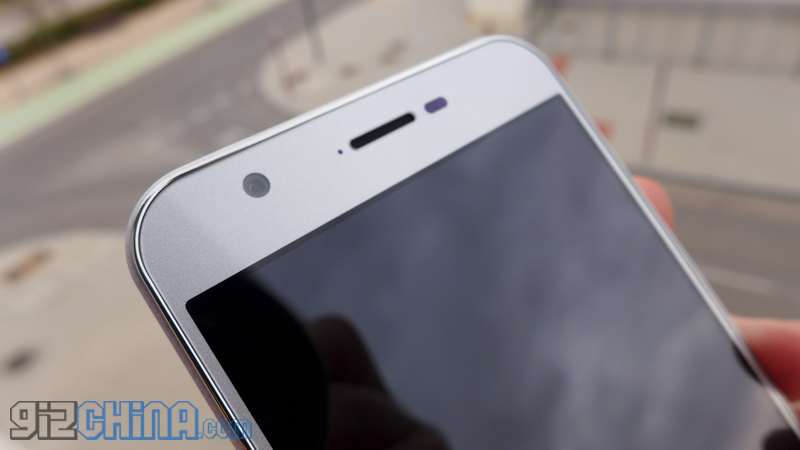 Across the front we have a silver faceplate which is encircled by a chrome bezel. The 5.5-inch display appears to have very narrow bezels, but turning the phone on we see that the screen as a couple of mm of black edge around it effectively increasing the bezel to quite a large size.

As already mentioned the large chin area has no buttons which means easy one-handed landscape operation (no fear of accidentally touching a button), however I generally only use my phone in landscape when watching a movie or gaming and in these cases 2 hands are usually more comfortable than one. 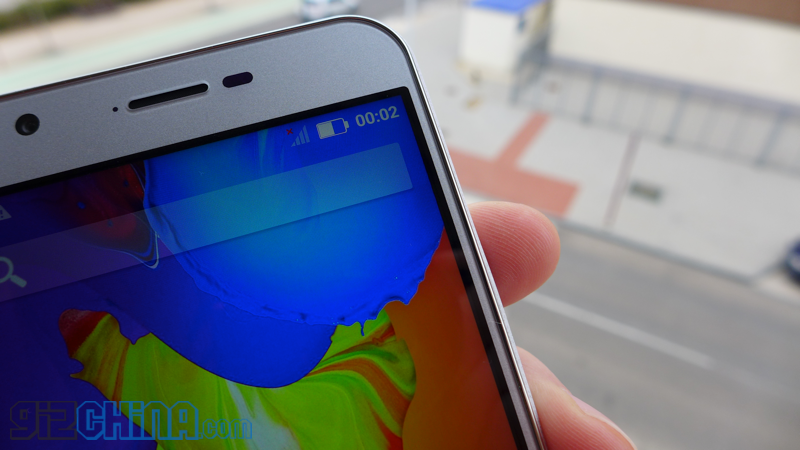 Above the large chin is the 5.5-inch FHD 1920 x 1080 display then above that the front facing 5 mega-pixel camera, receiver and various sensors.

There is no mention on the iOcean website as to which protective glass the iOcean MT6752 Rock uses but so far I have yet to scratch or damage the display, and iOcean boss John Li is confident enough to smash walnuts open with the phone without damaging it (see the video on the iOcean Facebook page).

So overall the design of the iOcean MT6752 Rock is very different in finish, but also quite similar in shape to the iPhone 6 Plus. It feels very well made, with a well manufactured body, and some odd design choices.

No matter how you feel about the look of the MT6752 Rock, the specifications of the phone are equal to many other mid-range flagship phones and with the use of the latest SoC tech from Mediatek it has some very desirable features. 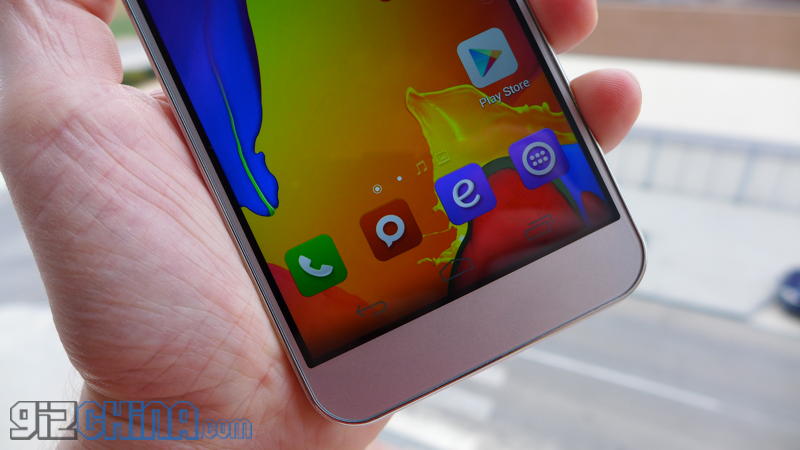 Specification highlights of the iOcean MT6752 Rock include a 5.5-inch full HD display, an octacore Mediatek MT6752 processor with 64 bit architecutre and native LTE support, plus Mali T760 GPU. There is 3GB RAM as standard! (as apposed to 2GB as standard on the Meizu and JiaYu S3), 16GB internal memory and room for an SD card. Bluetooth 4.0 , 2.4Ghz/5Ghz WIFI, 14 mega-pixel main camera, 5 mega-pixel front and dual speakers.

iOcean also gave the rock fast charging capabilities when used with a specific fast charger, and have promised an Android 5.0 Lollipop update is in the works! 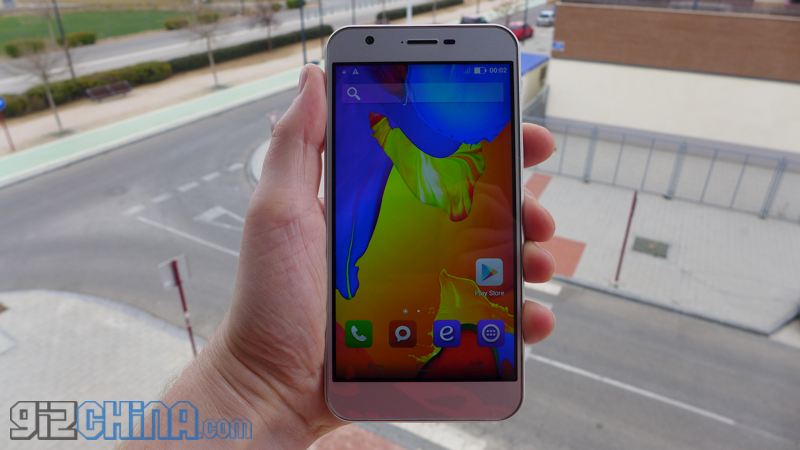 With one of the most popular and sought after Mediatek processors and 3GB RAM purring away under the hood of the iOcean MT6752 Rock we really needn’t worry about the performance of the phone. Every application you could want to use on a daily basis runs smoothly and the fact we have 3GB RAM to play with means you can leave more apps running in the background for longer.

When it comes to benchmarks we get some pretty good scores from Antutu, GFX Bench etc, but we did notice that iOcean don’t seem to be getting the most from the MT6752 and 3GB RAM at the time of writing. Compared to the JiaYu S3 with only 3GB RAM for example the iOcean is a little down in the benchmarks. Does this affect real world and gaming performance though? No, not in the slightest, but we still hope to see future updates that get the best from what’s on offer.

Now many people really love Mediatek’s new processors for their LTE, 64bit and faster performance, but what I really love is the new and improved speed of GPS. In the past Mediatek phones had a bit of a bad reputation for GPS performance but the MT6732 and MT6752 (found in the iOcean) have helped improve things.

As well as great GPS performance, the sturdy plastic body of the iOcean MT6752 Rock also allows great WIFI signal strength without interference. The iOcean also supports WCDMA BAND1/2/8; FDD BAND3/7/20 which I tested on Vodafone in Europe with great LTE speed. Speaking of LTE support though, the iOcean Rock can support an LTE SIM in either of the SIM trays but only one SIM at a time. I.E you won’t be able to run dual LTE SIM in the phone. 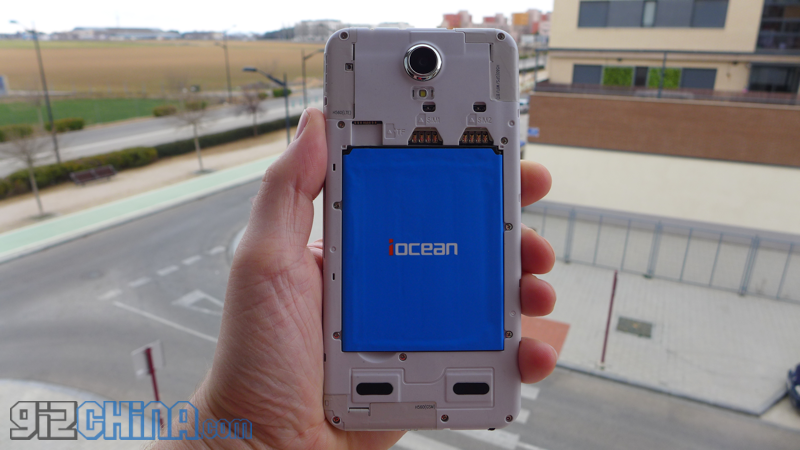 The large chin on the phone might be the one item of the phone which upsets some people from a aesthetics point of view, but it was the fact that iOcean chose a relatively small 2300mAh battery that upset many other possible buyers. We are more used to 5.5-inch 1080 phones with 64bit chips and LTE boasting larger 3000mAh batteries, so it was a bit of a disappointment to see a small battery in the phone. The good news is that the battery does support fast charging, and as it is removable you can carry a spare with you. If neither of those solutions appeals to you then get used to giving your phone a top up in the evening or when you arrive at work the next morning. Running LTE, and WIFI all the time, few phone calls but lots of data use I got to around 10am the following day after a full charge, so not quite a day and a half. With video, gaming or music I would need to charge by the evening of the same day. 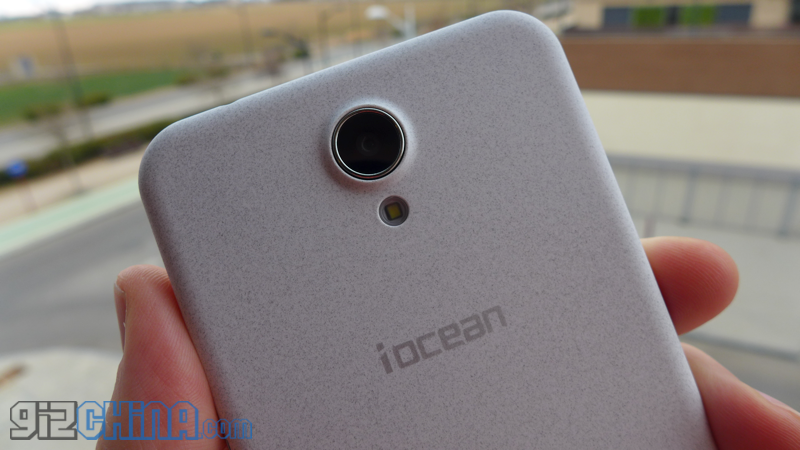 After being surprised by the quality of the 13 mega-pixel Sony sensor on the JiaYu S3 I was excited to see what the 14 mega-pixel sensor of the iOcean MT6752 Rock would be capable of.

The iOcean MT6752 Rock certainly represents a step forward in photography capability when compared to previous iOcean models. Photos taken in bright sunny conditions are captured quickly and with good detail. You’re not going to find a camera that will taken on camera centric phones, but at this price point there are certainly worse camera options.

Like many smartphones it is when light is a premium that the iOcean MT6752 Rock has its work cut out. Without light a lot of noise creeps in to the images. With a little work though you can get some good night photos, but then it is the lens which lets the sensor down.

So not the worst camera on the market, but a long way from being one of the best, and when compared to the JiaYu S3, Meizu m1 note or even Xiaomi Redmi 2, the iOcean is lagging well behind.

The iOcean MT6752 Rock is an odd phone with some odd design and specification choices. On the one hand we have a powerful chipset with 3GB RAM and wonderful 5.5-inch FHD display which equals any phone of similar specification, but then we have a small battery, and below average camera performance. 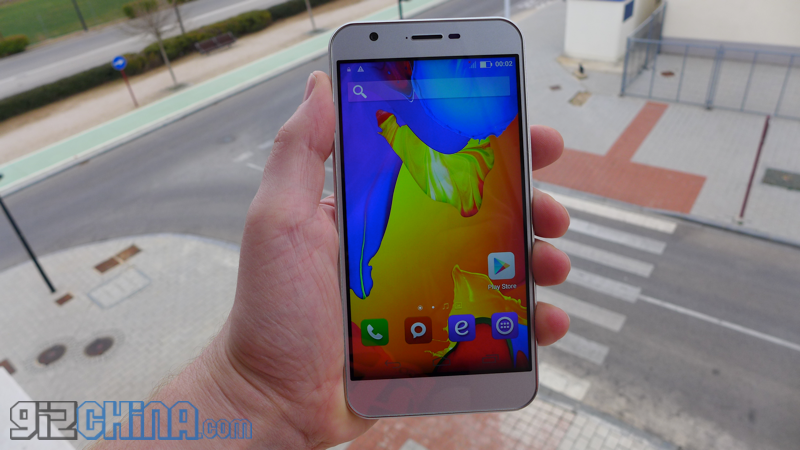 From a design point of view the Rock is an odd phone, but in a good way, however I’m afraid that with more regular looking devices on the market appealing to a larger audience iOcean may have gambled a little too much on the styling.

If you are an iOcean fan and are looking for a flagship phone from them but the MT6752 Rock doesn’t quite hit the mark then keep your eyes out for news of the iOcean X9 which will have a alloy chassis, 5-inch display and the same MT6752 chipset and 3GB RAM!