Xiaomi have confirmed that they will be launching their flagship Xiaomi Mi5 on the 24th Feb!

It’s been a long haul for fans of Xiaomi’s flagship products, but finally the date we have been waiting for has been confirmed. Xiaomi today released their plans to launch the Xiaomi Mi5 on the 24th Feb.

Apparently the launch will take be spread over a 2 hour long presentation, so we assume the Xiaomi won’t just be launching the Xiaomi Mi5 at the event (unless of course they plan to release 2 x Mi5 as these rumours suggested). 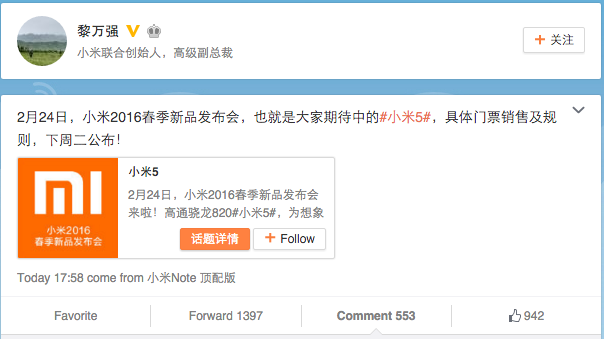 Very little is confirmed for the Xiaomi Mi5 at this moment the only firm detail being that the phone will come with a Snapdragon 820 chipset.

Other rumours have pointed at everything from a curved display, physical home button, to a flat front and rear mounted fingerprint scanner.

To keep in competition with other brands though the Xiaomi Mi5 should ship with at least 4GB RAM, 16 mega-pixel rear camera, laser focus and a large battery with fast charging. Keep posted for more Mi5 news.

Previous GooPhone plan to launch the Apple Watch 2 before Apple