According to a report by Canalys for Q4 2016, Xiaomi is the second-largest smartphone brand in India by market share.

According to the report, Xiaomi made 3 million shipments in the quarter, second to Samsung’s 6.2 million. Following Xiaomi in the top 5 are fellow Chinese brands — OPPO, Lenovo and Vivo. 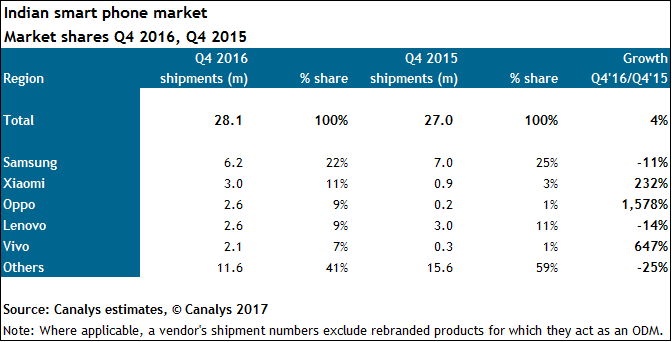 What makes this conclusion interesting are two things: (i) Xiaomi, despite its online-only strategy, is the topmost Chinese brand in the company and (ii) besides Samsung, every other smartphone brand in the top 5 comes from China.

OPPO and Vivo have both made a strong push in the offline market in India, both with market presence and sponsorships at key events, including cricket and TV shows. Both brands have also spent huge sums of money to get brand ambassadors from Bollywood.

Xiaomi may be having a bit of a tough time trying to sell their high-end devices, especially with newfound competition in brands like OnePlus, etc. However, these reports show that the brand is far from done.

Next UMi Z Unboxing and Hands On: Hmmm, exciting