At this time no one can deny the existence and near arrival of OnePlus 5T. After a whole sea of leaks, and even a confirmation through the own OnePlus. It’s undeniable the OnePlus 5T will reach the shores in shortcoming days, with a scheduled launch happening on November 16.

In another dose of leaks, the OnePlus newest flagship has just spotted on GFXBench, a popular benchmarking site that sometimes is a good place to find a leak or two. However, the official listing can’t be found on the site anymore. For that reason, we can’t confirm if this leak is genuine, but still is a very close shot. 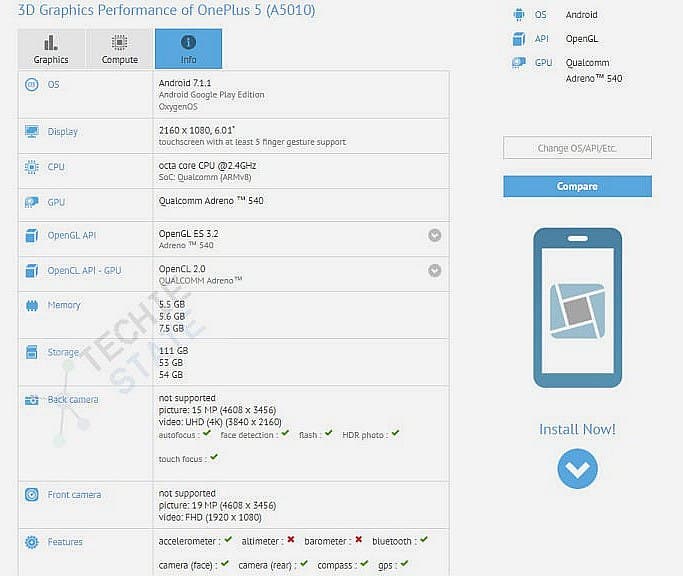 Curiously seems that we aren’t going to see a Oreo OxygenOS stable build make a debut here. As the listing sugests the OnePlus 5T will ship with Android Nougat 7.1.1 just out the box. If this leak is accurate enough we highly hope to see an Oreo update arrive in a short manner after the release.

Camera wise, the GFXBench refer a single 16MP sensor, but we all know that OnePlus 5T will ship with the same dual-camera setup found in it’s non-T young brother. For the selfie enthusiasts the listing also mark a 20MP sensor in the front, a considerable bump over the 16MP found in OnePlus 5.

We were curious to see if the Battery will get a revamp in capacity just like OnePlus 3T got, however the listing didn’t include any info regarding battery. However, Pete Lau took his Weibo account to refer the comeback of Dash Charging in the OnePlus 5T, so we can just presume a high capacity battery to need the best of fast charge capabilities.

His statement also come to bury any hope of those expecting wireless charge technology to debut on OnePlus 5T. According to the company’s CEO with Dash Charge speed, wireless charge is useless while would make the handset more thicker.

As mentioned before the OnePlus 5T is expected to arrive on November 16. So we still have two more weeks to sail around the sea of leaks and rumors. Don’t forget your pinch of salt to digest the news.

Next Can you spot the OnePlus 5T on this picture? Plus another full display leak