It’s an undeniable fact that most of the smartphones enthusiasts are not interested in Samsung mid-range class of devices. And that interest decrease even more, when we look to the powerful mid-grade handsets offered by China. But we can’t just ignore Samsung’s play in the segment as a lot of consumers buys their entry and mid range smartphones.

Based on this, a new device got its specs leaked in the realms of Geekbench. However this time, we are not talking about a close release, but a handset that is likely coming in the next year, the Galaxy J2 Pro 2018. 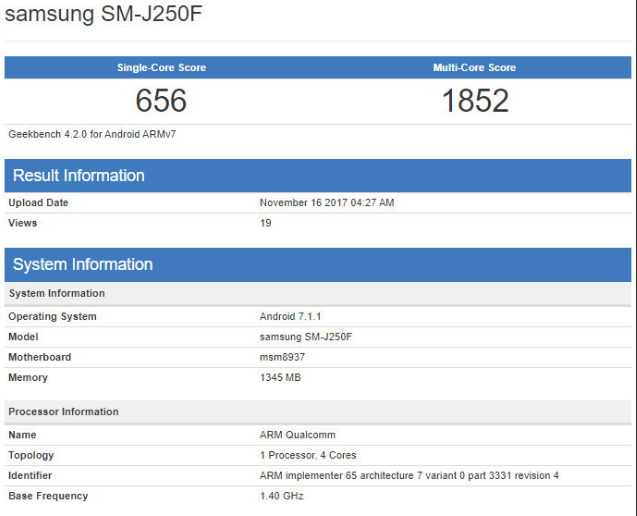 The device appeared in the Geekbench database codenamed as Samsung SM-J250F. According to the listing, Samsung Galaxy J2 Pro 2018 will come e by the Qualcomm Snapdragon 430, the 1.4GHz Quad-core will work along 1.5GB of RAM. Curiously the handset appeared running Android Nougat 7.1.1, but this may change before the device gets released, otherwise would be disappointing to have a 2018’s smartphone with a 2016’s Android OS.

The Samsung Galaxy J2 Pro also comes with the Dual-Sim functionality. The handset arrive in the market early in the next year, aiming some entry markets, where Samsung does well. Considering the leaked details it’s to early to consider a price tag for this smartphone, but we would bet in something above $100 and below $150.

Next Specs and presale-start date for Maze Alpha X revealed