We’re still about 2-3 months away from the official release of the Galaxy S9 family, and while we’re at the moment not certain on what these devices will bring to bear, we sure have reasons to get excited. Just recently, an official teaser from Samsung suggests that artificial intelligence might be given a prominent role on the Galaxy S9.

While there have been a back and fro reports on some changes to expect with the Galaxy S9, the latest renders which just emanated from popular case make Ghostek reveals a whole lot about the upcoming device. While most of the display is embedded in the case, it is quite obvious the device will feature edge-to-edge or 18:9 display.

According to the render, the galaxy S9 will retain the 3.5mm headphone jack and a USB Type-C port.  On the sides, you will find the usual controls like on and off, volume rocker and a button while the left of the device features the usual volume rockers button to activate Bixby assistant.

Interestingly, the renders reveal that the device could sport a  dual-camera setup with LED flash. While there is no mention of what could be the exact configuration of the dual cameras, the renders is however in line with a sketchy CAD design of the Samsung Galaxy S9 which popped up earlier on the web. It reveals that the device could feature a vertically aligned dual camera setup, with the fingerprint scanner lying right below it. 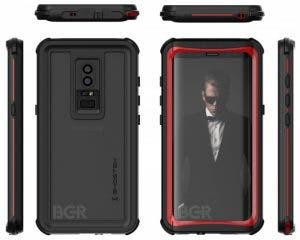 The render didn’t reveal anything new about the device in terms of internal configurations, but a whole lot of them have been outed in previous leaks and rumors. We heard recently that Samsung could be preparing a Galaxy S9 mini to join the usual S9 and S8 plus.

We are certain the device will be powered by Samsung’s latest Exynos 9810 and the upcoming Snapdragon 845 in some markets. We would be revealing some other details of the device as they arrive,  so you are enjoined to keep an eye on this space for more information.

Next Xiaomi partners with Hipad to manufacture Power Banks in India