Presently, all the fuss in the smartphone world is created by the recently launched OnePlus 5T and just a few days after its launch, it is receiving its first update.  This update which arrives as Oxygen OS 4.7.2  is a light update and it weighs only 107MB. This patch comes with a fix for the Wi-Fi WPA2 security issue dubbed KRACK vulnerability. 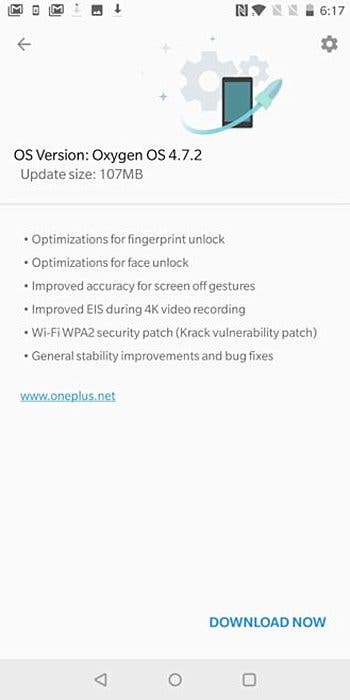 In addition, other optimizations like improvements for fingerprint and face unlock, EIS during 4K recording, and accuracy for screen off gestures are included in this update. As usual, it comes with some bug fixes and operation stability.

OnePlus 5T is powered by a Snapdragon 835 chipset coupled with 6GB/8GB of RAM and 64GB/128GB of internal storage. It sports a 6-inch display (18:9 aspect ratio) with 1080 x 2160 pixel resolution and its graphic is handled by an Adreno 540 GPU. This smartphone runs on OxygenOS based Android 7.1.1 Nougat and comes with a dual camera setup. The OnePlus 5T sports a 16MP front camera and a 20+16MP rear camera. The lights of this smartphone are kept on by a 3300mAh battery which supports Dash Charge.

Next Gionee S11, S11S, F6 and Steel 3 outed in official live photos ahead of launch