After the failure in the smartphones market, Microsoft has largely abandoned it. But this doesn’t mean the Redmond-based company shouldn’t have an interest in this niche at all. Earlier this year the manufacturer announced it will continue making handsets, but it wants to do something different. No one knows what this means. So nobody comes in with suggestions. On one hand, we know Microsoft works jointly with Qualcomm to bring its SoCs to the Surface line tablets running on native Windows 10 OS. On the other hand, Qualcomm is going to announce its newest creation of Snapdragon 845 in coming days. So it’s quite possible to see the first SND845-powered Surface portable tablets on the market. But it turns out the company is working on a smaller device with this chip onboard. There is every chance to hear about the upcoming Microsoft Surface phone in the nearest future.

Today the company has posted a job listing for a ‘Hardware Test Engineer / Manufacturing Engineer’ and specifically one who is an expert in Wi-Fi technologies and manufacturing. The individual’s responsibilities are to check out and test the use of wireless technologies based on the Wi-Fi 802.11ax standard. The company also mentioned in the ‘must-have hard skills’ section a hands-on experience with Qualcomm MSM8998 which is the Snapdragon 835 chip and also the Qualcomm SDM845, which is the Snapdragon 845 chip.

However, the job opening doesn’t go into detail about the project. That’s why we have no certain info what a device it is going to work on. There are a few variants. Say, this could be a new Microsoft Surface tablet or even a smartphone. But as the Snapdragon 845 chip has been already reserved by many smartphone makers such as Samsung and Xiaomi, it’s quite possible Microsoft will join the marathon as well. 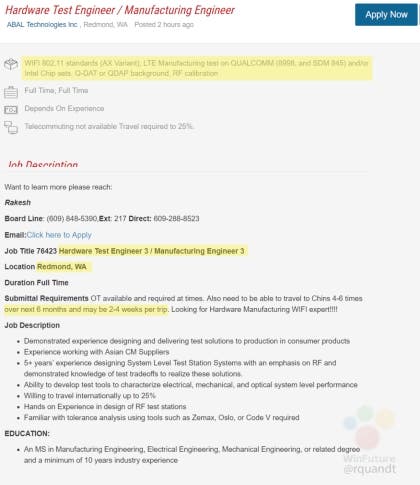 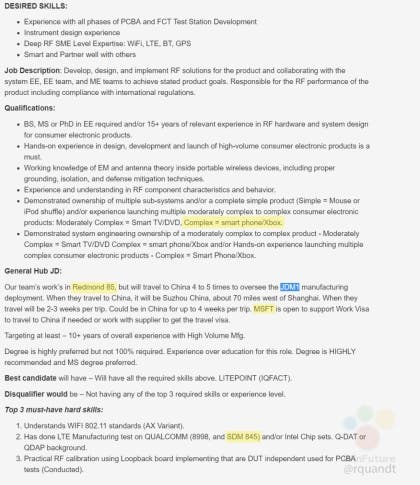 Previous China: OnePlus 5T Gets Over 450 Thousand Reservations In 2 Days

Next Is the Vernee Active going to be the best looking rugged phone ?