There have been a lot of renderings, leaked images and configuration speculations with respect to the expected Samsung Galaxy S9 which is scheduled to be released at the International Consumer Electronics Show (CES) in January 2018. Today, a mysterious “real” image of this smartphone surfaced online and this time, the emphasis is not the screen of the device. Following Huawei’s footsteps, reports have it that the Galaxy S9 will also be equipped with AI technology and Bixby 2.0. This means that there will be more image recognition and a better real-time prediction of user needs. Earlier today, we reported that this device will come with the expected Qualcomm Snapdragon 845 chipset. In addition, the cameras will be greatly enhanced and it will come with an adjustable f/1.5 large aperture. 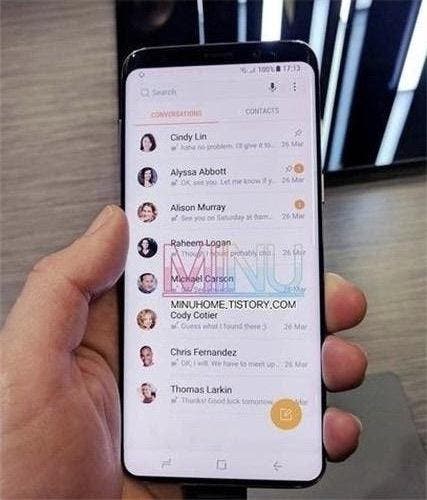 In other news, Samsung seems to be developing some innovative product for the smartphone industry. Earlier, Samsung announced that it has developed a “graphene ball,” which is a unique battery material that enables a 45% increase in capacity and 5 times charging speed than the average Lithium-ion battery. This means that a smartphone battery can be fully charged in 12 minutes and a 60 ℃ can be maintained which greatly improves safety. Nevertheless, mass production of this product will take some time. Since the release of Galaxy S9 is imminent, it will probably not use a graphene battery. Also, Samsung recently announced a 512GB eUFS storage ships for flagship smartphones. At CES 2018, Samsung is expected to release three smartphones include a 5.8-inch Galaxy S9, 6.2-inch Galaxy S9+, and 5-inch Galaxy S9 mini. It is reported that the price of the small screen S9 will not exceed 4,000 Yuan ($604)

Next MIUI: Want To Extend Your Battery? Try These Few Tricks