Tomorrow 360 Mobiles will launch two new phones. One of them is said to be the regular 360 N6 with a full-screen design, while the second one should be the 360 N6 Lite packed with an identical hardware but an ordinary 16:9 screen. However, features of both devices have been leaked in spy photos. Therefore, we know much about them. But if you don’t trust those leaks, here is a semi-official confirmation of the 360 N6’s specs list. The phone has appeared on Jingdong at a price tag of 6666 yuan ($1007). As you understand, this is a conditional pricing set by default. We have heard this model will cost around 1500 yuan ($226). So we can ignore the pricing shown by the retailer. The only thing we should focus on is the specs list. 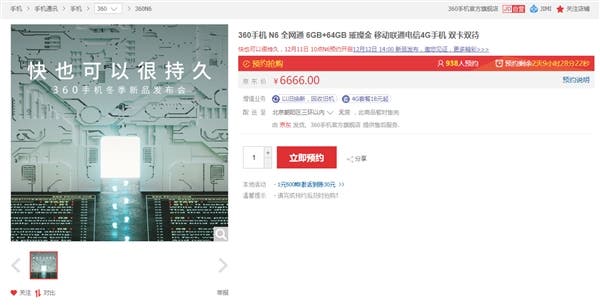 According to the source, the 360 N6 will be packed with a 5.93-inch full-screen with a resolution of 2160 x 1080 pixels (Full HD+). This is also going to be the phone’s selling point. But what’s amazing the N6 will come with a Snapdragon 630 chip, which is considered to be one of the offers in the niche. The chip is paired with a 6GB of RAM and 64GB of ROM. As you guess, the second selling point is considered to be the performance provided by a respectable hardware. Third, the 360 N6 is said to come with a 5030mAh battery. Thus we are dealing with a monster-size battery capable of providing a very long life. Though the camera modules are acceptable, they can’t be called astonishing. The phone features an 8MP front camera with an aperture of f/2.2 and a 13MP rear camera.