A couple of years back no one has heard about 360 Mobiles outside China. Now this company makes a huge stir with every leak and rumor concerning its upcoming models. Like many other Chinese smartphone makers, 360 Mobiles has been designing handsets at budget price tags. Say, its phones could be described as ‘the cheapest 4GB RAM phone‘, ‘the cheapest Snapdragon XXX-powered model’, etc. As for now, the company joined the race of full-screen smartphones, and it can be considered as one of those brands that bring a good experience for a song. Though the newly launched Xiaomi Redmi 5 and Redmi 5 Plus do not leave chances to others, the 360 N6 Pro is still one of the best offers in this market. However, we wondered why this model had been launched sooner than the original 360 N6. Recently the company’s CEO replied saying it is going to be officially unleashed on December 12. The date is getting closer, so it’s quite reasonable to see many leaks and hear many rumors about this model. Today is no exception.

A popular digital blogger published a suspect 360 N6 product page information revealing the complete specs list of the upcoming model. Though most of those features are familiar to us, we should take a close at it. 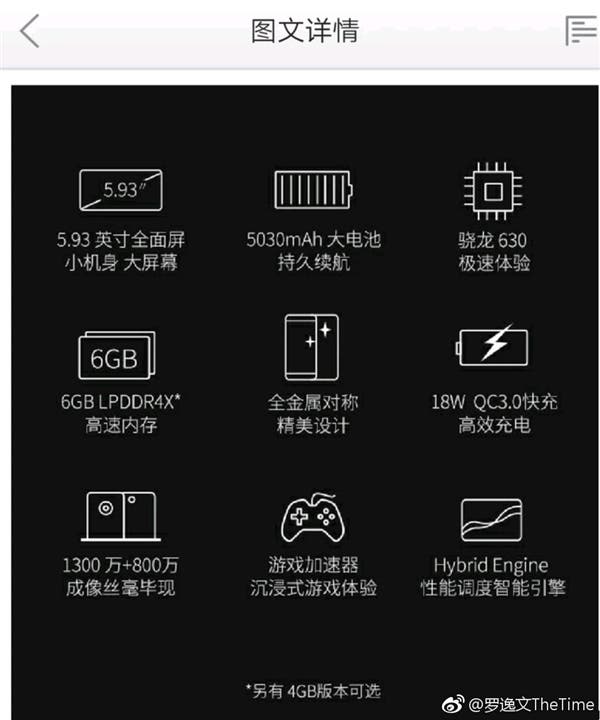 According to the leaked photo, the 360 N6 will use a metal body with a symmetrical design. The front panel carries a 5.93-inch full-screen with an aspect ratio of 18:9. There is also a Snapdragon 630 chip paired with a 6GB LPDDR4X RAM. There are only single camera modules on the front and back using 8MP and 13MP sensors, respectively. The 360 N6 is said to come with a giant-size 5030mAh battery supporting 18W QC3.0. At last, the phone should come with a game accelerator to provide an immersive gaming experience.

Next 360 N6 Lite Specs Spotted: It'll Launch Along With The Regular Version