The first smartphones packed with the newly announced Snapdragon 845 SoC will appear on the market in the first quarter of 2018. The first brands to come in with such models are Samsung, Sony, Xiaomi, ZTE, and a few others. The Snapdragon 845 chip is considered to be the most powerful mobile chip in the world. Although we should use the term of ‘mobile chip’ carefully because Snapdragon SoCs are entering the laptops and tablet PCs market already. Anyway, Qualcomm makes chips for various niches. The SND845 is the toppest-end chip that will appear only on premium flagships. But what about the rest of smartphone categories? Today a mysterious specs table has been leaked on the net concerning the Snapdragon 670/640/460. Let’s figure out. 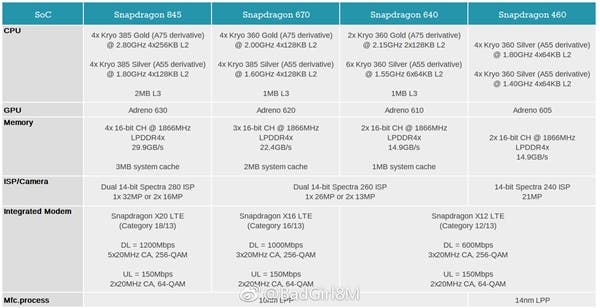 As the names suggest, the Snapdragon 670 is going to replace the super mid-range Snapdragon 660 found on a few astonishing phones such as the Xiaomi Mi Note 3, 360 N6/Pro, Smartisan Nuts Pro 2, OPPO R11(s)/Plus, and VIVO X20/Plus. The SND660 has been known for its great performance close to the Snapdragon 821. The Snapdragon 670 should be found on identical handsets as well. According to the spotted table, the Snapdragon 670 will use a 4x Cortex A75 Kryo 360 Gold (small cores) + 4x Cortex A55 Kryo 385 (large cores) architecture. However, the IPS is lowered to the Spectra 260, while the baseband is upgraded to X16 (up to 1Gbps).

The Snapdragon 640 is going to be a regular mid-range chip. Therefore, it will appear on devices from this niche. It will continue the best traditions of the Snapdragon 625 that has been found on a number of smartphones such as the Xiaomi Mi Max 2/A1/5X, Redmi Note 4/5 Plus, Meizu M6 Note, VIVO X9, Nubia Z17 miniS, etc. The Snapdragon 640 is going to use a 2x Kryo 360 Gold + 6x Kryo 360 Silver architecture paired with an Adreno 610 GPU and a baseband shrank to X12.

Finally, the Snapdragon 460 is focusing on low-end market. It’s an octa-core processor paired with an Adreno 605 GPU, a reduced ISP of Spectra 240 supporting maximum a 21MP camera.

The first two SoCs run on a 10nm process node as supposed, while the latter does on a 14nm technology node. These chips are supposed to launch on January 9 at CES 2018.