The most popular smartphone line of Meizu, the Charm Blue is unstoppable this year. Recently, the company launched its first full-screen smartphone named the Meizu M6S (aka Charm Blue S6), and immediately after it, the net began buzzing about a new phone dubbed as the Meizu E3 (or Charm Blue E3). Today, on February 7, has published a poster, in which it requires 10 enthusiasts to test its next gaming smartphone coming our way from the Charm Blue series. 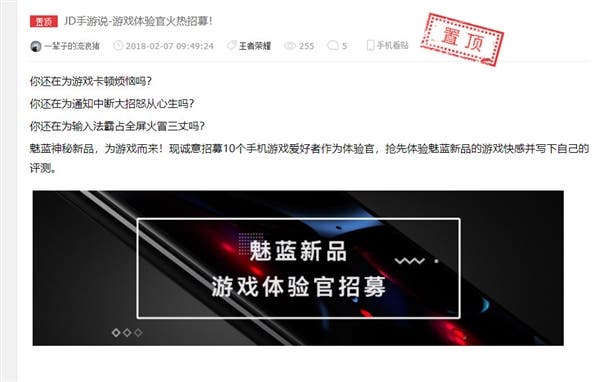 According to the announcement, those who want to participate in the recruitment should apply for it on February 7 – March 7. The chosen testers will be sent their own unit without returning. They have to test it during a certain time period and write a review.

Nothing said about the phone mode, but the announcement showcases it will support ‘Game Mode 2.0’. So tend to think this is the previously rumored Meizu E3 because we haven’t heard about another product but this one. Of course, there is also the Meizu 15 Plus, but it’s an exclusive model made by the company’s president personally.

The previous leaks show the upcoming Meizu E3 will adopt the full-screen design like the Meizu M6S, a dual-camera placed on the back vertically, and a fingerprint scanner located on the side. All these features are identical to the M6S, but we have learned it will also come with a metal housing like the Meizu Pro 6.

As we don’t know much about the Meizu E3 specs, it’s difficult to make assumption why it’s considered as a gaming phone. And if it is so, the rumored price tag of 2499 yuan ($398) will make it quite competitive among other top brand models.