Recently, Smartisan launched its new flagship dubbed as the Nut 3. But we have been waiting for another model, the Smartisan R1 that is said to be a revolutionary phone. It’s said the R1 stands for Revolution One. Anyway, we haven’t heard much about the R1. Today Qualcomm released a video about AI, 5G, and many more. Smartisan has placed a comment on the video mentioning the Snapdragon 845. This made many geeks think the new flagship of the company may carry the SND845 SoC. 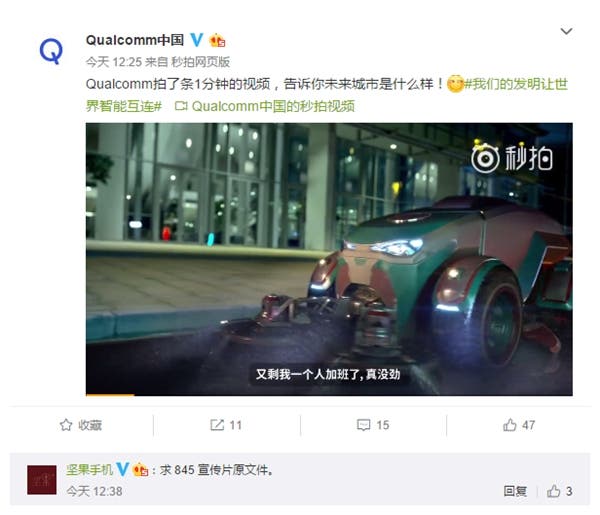 Actually, Smartisan has announced it will hold a conference on May 15 and a revolutionary smartphone in face of the Smartisan R1 will be unleashed. It’s been said one of the selling points of this device will be the overhauled OS. The new software should come with AI and it’s expected to achieve over 200% efficiency in terms of performance.

A couple of days ago, Hao Yonghao, the company’s CEO was asked whether their software will be affected by the US restrictions towards ZTE. As you remember, the U.S. government denies China’s ZTE access to American technology for seven years. This simply meant no Qualcomm chips will be on the ZTE-branded devices. So many users have been thinking other Chinese smartphone vendors may suffer from it. Fortunately, Hao Yonghao gave a positive reply saying the US restrictions don’t refer to other Chinese smartphone makers. So Smartisan is out of the list and the new software will debut on the R1, as planned.

So, now there is every reason the new Smartisan OS will work onto the most powerful mobile chip. As you know, the Snapdragon 845 is based on the 10nm LPP process and it comes with a built-in Kryo 385 architecture and an octa-core design. Thanks to the tons of improvements made in this chip, the CPU clock speed of 2.8GHz, and Adreno 630 GPU, it scores over 270K at AnTuTu. Seems the Smartisan R1 will be a revolutionary phone, as reported.

Previous Xiaomi Mi Pad 4 Is In Works: To Come Soon