Samsung will be announcing a new smartphone in few days time. The Korean giant has today sent out media invites for a launch event in the form of a teaser image. The event is tipped to take place in  Mumbai, India. The teaser has the “Say Hello to Infinity and More” tagline crested inside a phone with slim bezels above and below the display, while the bezels on the sides are completely non-existent.

While Samsung hasn’t provided details of the product expected on the said date, the teaser comes right in at the time when there are increasing rumblings that the Korean giant could be unveiling the long-rumored Galaxy J4 and the Galaxy J6.

Both devices have been on the rumor mills for quite some time now. The Galaxy J4 particularly has been spotted at the NCC, and Geekbench, while the Galaxy J6 earlier in April received FCC certification. Earlier this week, Sammobile exclusively revealed the complete specs and features of both devices. In that report, it was revealed that the Galaxy J6 will come with a 5.6-inch AMOLED Infinity Display with 18:9 aspect ratio. Display resolution hasn’t been reported but the prediction is that it will be at least HD+(1480×720p). As for horsepower, the J6 is equipped with a middling Exynos 7870 octa-core chip clocked at 1.6GHz. 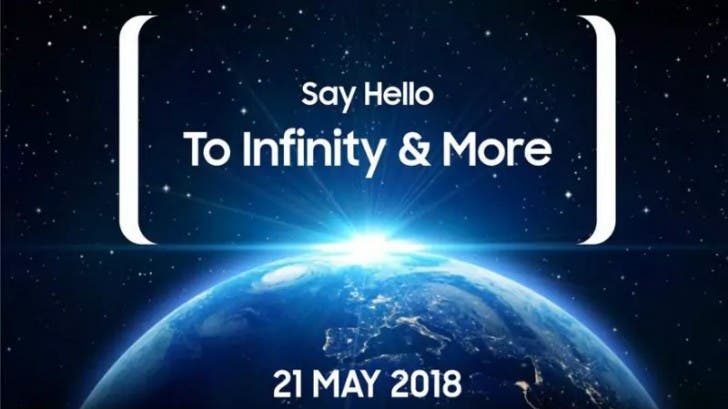 The Galaxy J4, on the other hand, could arrive as a toned down version of the Galaxy J6. It is expected to ditch the Infinity Display and instead will come with a 5.5-inch conventional 720p panel with the Exynos 7570 clocked at 1.4GHz.

There is a chance the company could also announce the Galaxy A6 (2018) and Galaxy A6+ (2018) which were announced for other markets a few weeks back. Whatever Samsung announces at the launch event, we would give you timely updates.