About the upcoming monster-size smartphone of Samsung, We have heard everything in this world exists. Initially, it’s been said the Samsung Galaxy Note 9 will support the much-anticipated on-screen fingerprint identification. But later it was canceled. As for now, the phone is said to come with a large memory combination of 8+512GB. Plus, it should support an SD card extension option. In order to understand what improvements it will get, in addition to the leaked photo, SLASHGEAR has introduced a comparison chart. 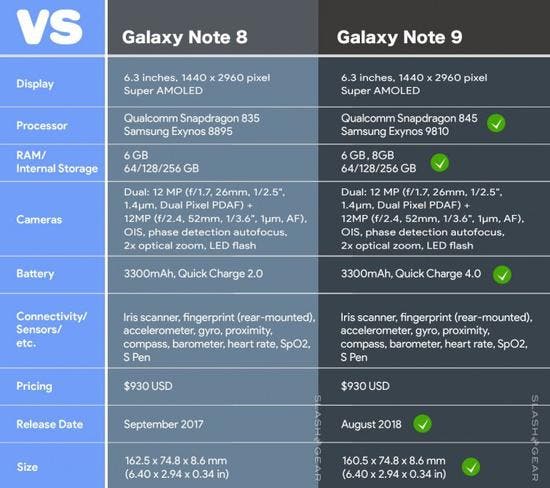 We have also heard the Samsung Galaxy Note 9 launch delays due to the design change. But looking at the leaked photo(s) we can state there are not many differences between the Galaxy Note 8 and the upcoming model.

In this sense, probably, it makes sense to focus on its hardware. Previously, the phone appeared on benchmark databases for a few times. So we know it will come with two variants. One of them will be packed with a Snapdragon 845 chip and release in China, while the second model will be powered by its own Exynos 9810.

Actually, there is a huge gap between the benchmark results. But we are sure closer to the launch, the performance provided by two chips will be almost identical.

Some sources claim the phone will debut on July 9, but we have already heard it will come on August 9. So there is nothing certain about its launch date as well.

Next Do you want the Bestek snail USB Charger for just $0.01 ?