The Xiaomi Mi A2 will be the Chinese company’s second smartphone under the Android One program. It has been making the rounds online for weeks now. It recently received NCC certification confirming its existence after popping up at various places. 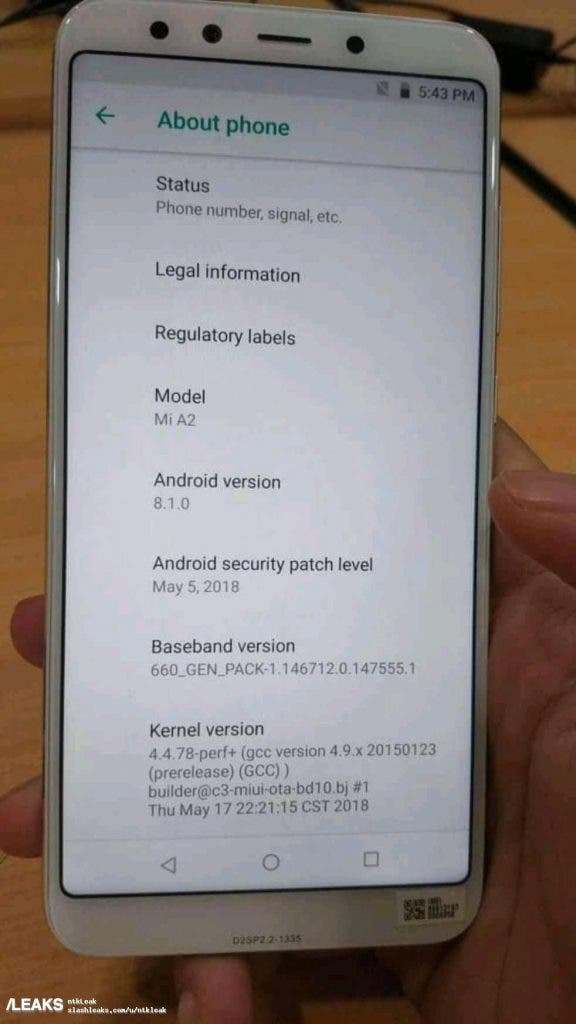 Another leak has been reported which details the ‘About Page’ of the smartphone. The design is exactly the same as the Mi 6X which is not a surprise. The reason to believe this is the Mi A2 is the UI. It is sporting stock Android in a Mi 6X shell. The page details a phone that has been updated up till the May 2018 patch which means that this phone is probably ready for launch.

In other reports, the Xiaomi Mi A2 was listed on a Swiss website before the listing was taken down. The website put the start of sale date on August 8th. In another leak, the Mi A2 was detailed in a hands-on video by Spanish Youtubers who somehow got their hands on the phone. This too was taken down soon after. A visit to Geekbench confirmed the existence of the Qualcomm Snapdragon 660 chipset coupled with 4GB RAM. The complete spec sheet was also leaked back in April.

If there’s anything that can be inferred from these reports is that the Mi A2’s launch is imminent. Xiaomi took to Twitter to quiz people regarding the location where they would like to see the next global event. This hints towards Xiaomi gearing up for the launch of the Mi A2.