The third generation of Xiaomi’s Mi Max series is set to be unveiled in a couple of hours from now. The event is set to happen on July 19 in China, and while the last few weeks already ushered in a lot of leaks and rumors about the upcoming device, a couple of them were quite unreliable and as such could not be entirely relied upon.

Now, with just a few hours to its grand unveiling, the company President Lin Bin has confirmed the device’s key specs in a Weibo post released earlier today. As per his revelation, the Mi Max 3 will come with significant upgrades over its predecessor – the max 2, and like it was rumored earlier, the device will get a mild battery upgrade, will come with upgraded chipsets as well as improved camera configurations with AI features.

First off, the Xiaomi Mi Max 3 is expected to feature a slightly larger 6.9″ display with 18:9 aspect ratio, while it will ditch the SD 625 for a more recent Snapdragon 636 SoC. And unlike the previous generations of the Mi Max series, the Xiaomi Mi Max 3 will come with a 12-megapixel + 5-megapixel dual camera setup on its rear side, while a single 8MP sensor sits above the display for shooting selfies. Lastly, the Mi Max 3 aside from getting the quick charge support will come with a 5500mAh battery, which is 200mAh above that of its predecessor. 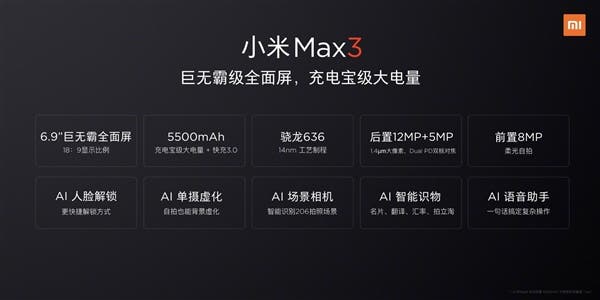 We’ll know more about the Xiaomi Mi Max 3 when it goes official a couple of hours from now.

Next OnePlus 6 Receives a 96 on DxOMark