A few days ago, while Huawei released the semi-annual report, Yu Chengdong, CEO of consumer business, revealed that Kirin 980 will debut at the IFA show in late August and early September, and it is the first commercial 7nm SoC. Also, the Huawei Mate 20 series will be the first to carry the Kirin 980 onboard and is expected to hit the market in October. Seems, this is the only feature confirmed by the company officially. But today, we learned about another key feature as well. 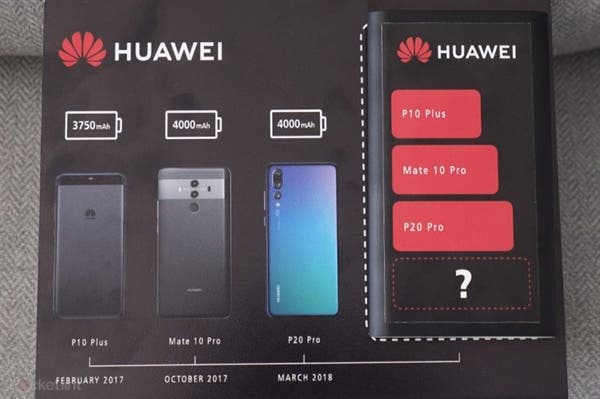 According to a Huawei promotional material, the Huawei Mate 20 may be equipped with a larger capacity battery and provide a longer battery life. In this material, Huawei compared the previous three flagship machines, including the Huawei P10 Plus with a 3750mAh battery, the Huawei Mate 10 Pro with a 4000mAh battery, and the Huawei P20 Pro with a 4000mAh capacity. At the very bottom, the promo poster left a blank rectangle hinting the upcoming Huawei phone will sport a larger capacity battery.

Previously, according to XDA, the initial configuration information of the Huawei Mate 20 included a 6.3-inch AMOLED screen, a Kirin 980 chip, a 6GB RAM, a 128GB ROM, and a 4200mAh battery supporting wireless charging. So if believing in both, the new Mate series phone will come with a large battery.

On the other hand, it’s not surprising. Thanks to the 7nm process, the EMUI 9.0 system based on Android 9 Pie and Huawei’s deep optimization, the Huawei Mate 20’s battery life can indeed be expected. At last, the Mate series phones have always surprised customers, and we believe the Mate 20 will continue this tradition.

Previous Huawei Nova 3i Lands in the Netherlands