At the beginning of this month, at China Joy 2018, Xiaomi released two new laptops in face of the new Xiaomi Gaming Laptop and the Notebook Pro GTX Version. The former model was priced at starting 6699 yuan ($978), while the lowest version of the latter came at 6299 yuan ($919). Today, the manufacturer officially announced it will release a new laptop on August 23. So the Xiaomi notebooks’ family will get another member in a few days.

There are not many things we can learn from the promo poster. However, the new Xiaomi notebook will come with a 15.6-inch screen, and the biggest highlight will be the full-featured keyboard with a numeric keypad area. This is more suitable for the office tasks. 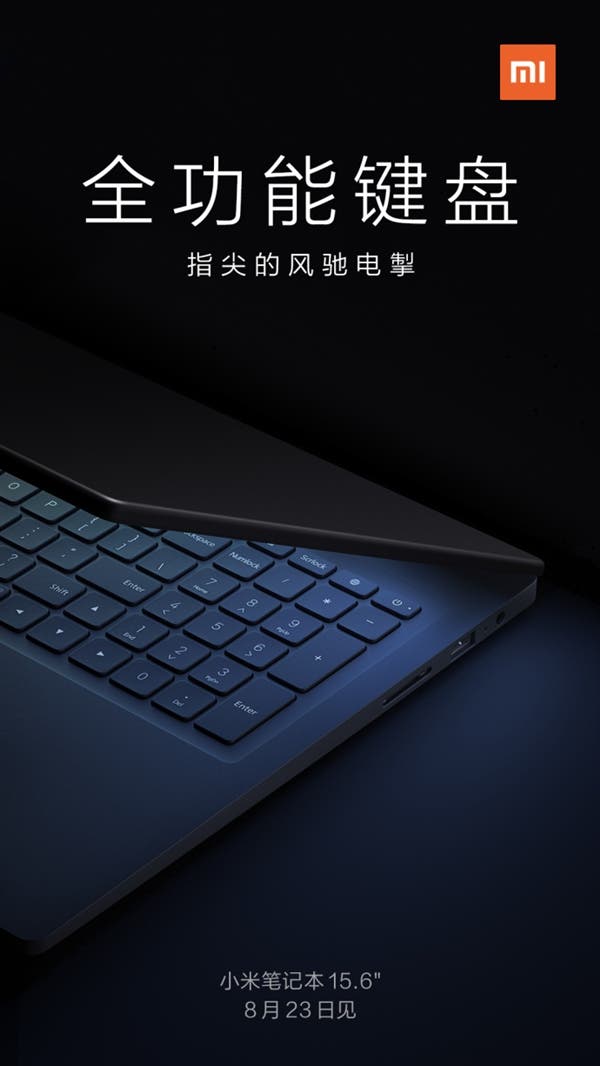 There are no hints what hardware the new Xiaomi notebook will come with, but we have no doubts it will be packed with the latest 8th-gen Intel chips. At the same time, the laptop should be packed with a Full HD screen with narrow borders and many useful ports. Shortly, its design is expected to be similar to the Xiaomi Notebook Pro.

At present, Xiaomi notebooks are divided into two categories of office and game. But both models are equipped with a high configuration, provide a great performance, and adopt a humanized design. However, the design is relatively homogenous and lacks customization. If Xiaomi can introduce more fashion styles in the future, it will be able to attract more customers.

Recently, Zhang Hua, vice president of Lenovo Group and general manager of China’s consumer business, was interviewed. When asked about his views and comments on the Xiaomi Gaming Laptop, he said that it’s welcomed to see more companies entering this field and develop with the industry. Obviously, it is advantageous. But at the same time, he also stressed that Lenovo’s products are solid. There are more than twenty years of work, it really matters. So imitation is OK, but those companies have to pay more attention to research, which is the only guarantees of development.