Huawei earlier today registered its presence at the 2018 IFA in Berlin, Germany, and while a lot of tech enthusiasts expected the firm to introduce a flagship smartphone, the Chinse giant choose to use the avenue for its keenly anticipated SoC – the Huawei Kirin 980 which is the sequel to the Kirin 970, which currently powers the Mate 10, P20, P20 Pro, and Honor’s Play, Honor 10, and Honor View 10.

The flagship Kirin 980 SoC is Huawei’s answer to Apple’s and Huawei’s chipsets which power the Apple iPhones and most commercially available Android smartphone. The Kirin 980 is a fast, ultra-high-performance mobile processor, and the most sophisticated SoC around, at least until the arrival of Qualcomm SD flagship chipset for 2019 which could arrive later in the year.

Let’s get it straight, Huawei in its presentation specifically highlighted a few World firsts for the Kirin 980: The Kirin 980 is the first SoC built on the TSMC 7nm process with dedicated Dual Neural Processing Unit (NPU). Huawei says it has stuffed the Kirin 980 with a  whopping 6.9 billion transistors which is about 1.6 times more than what’s on Kirin 970 resulting to about 40 percent reduction in energy consumption and a 20 percent improvement in speed.

It is also the first SoC to be built around ARM’s Cortex-A76 CPU and Mali-G76 GPU, the first with a Cat.21 smartphone modem supporting speeds up to 1.4Gbps, and the first chip to support 2,133MHz LPDDR4X RAM. Huawei’s latest is an eight-core architecture SoC presented in a tr-cluster arrangement. There is the two high performance based Cortex-A76 2.6GHz, two Cortex-A76 1.92GHz “middle cores” that takes charge of normal processes, and four 1.8GHz Cortex-A55 “efficiency cores” that step in for light workloads like music playback.

Speaking of the GPU, the Kirin 980 uses the Mali G76 MP10 with a clock speed of 720MHz, which the maker says should contribute about 48% bump in terms of performance and a 178% increase in power management. 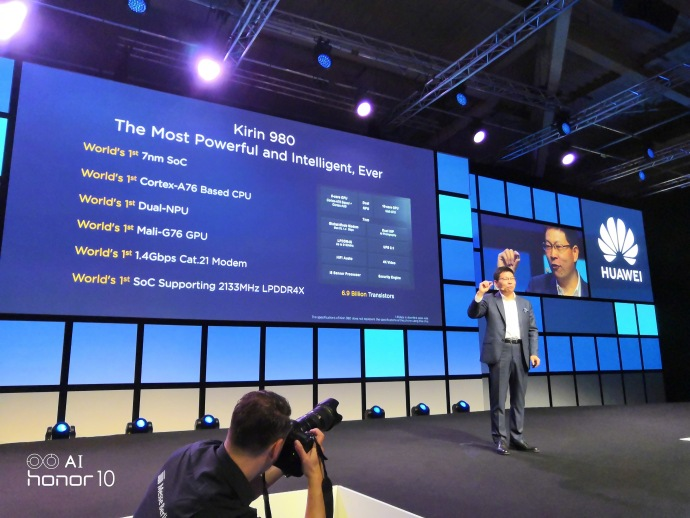 Elsewhere, Huawei says the included 2133MHz RAM, should confer on the Kirin 980 about 20 percent better bandwidth and 22 percent lower latency than the Snapdragon 845, so we should expect faster app launches across the full range of the world’s most popular apps. 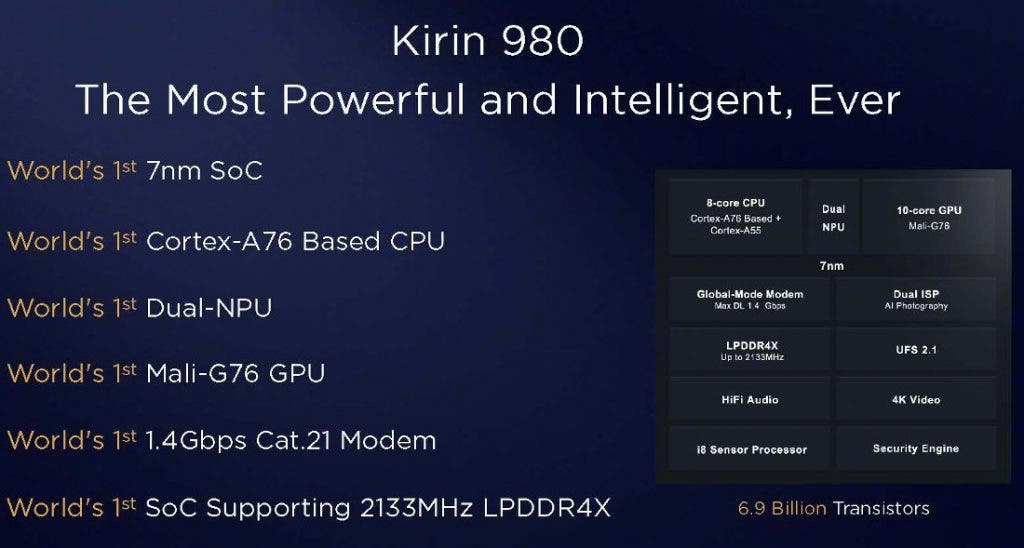 The Huawei Kirin 980 SoC will make its first appearance much later in October when Huawei launches the Mate 20 series in London. Huawei’s Honor sub-brand at its keynote presentation yesterday also pointed out that its upcoming Honor Magic 2 will debut with the Kirin 980.