Nubia’s big showing is the Nubia Z18, but there’s still more to show. The Nubia Alpha (written α) is a wearable smartband from the company, and one of the oddest we’ve seen. It features a flexible OLED panel that wraps around your wrist, and it runs Android. Not some version of Wear OS, but a full version of Android that basically makes it a functional smartphone.

The Nubia Alpha comes with a metallic exterior, which holds the long vertical OLED panel. Flanking the display are the buttons and camera sensor on a bulbous little body. Under it are some magnetic pins, probably for charging purposes. Nubia hasn’t shown any specs for the Alpha, nor have they confirmed if it will ever go on sale. Seeing the promotional material however, we can assume the Nubia Alpha will go on sale eventually. 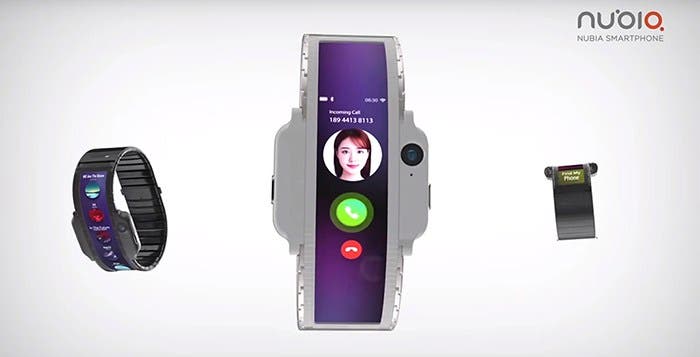 For the price, the company vaguely states that the Nubia Alpha could cost as much as current smartphones. That doesn’t really narrow it down much, though there’s a rough ceiling of $1000. The features we’ve seen from it seem to come from both phones and smartwatches. These include a pedometer, calling capabilities, a Find My Phone app, a heartrate monitor and bluetooth.

For more on the Nubia Alpha, stay tuned on Gizchina. We’ll report on the device as more info comes.