Xiaomi has two series of smartphones – Mi and Redmi. If the former one focuses on top-end models, the Redmi line handsets are considered to be cost-effective models. As for the current generation of Redmi series, the Redmi Note 5 is one of the best-selling smartphones in many markets, including India. So it’s quite reasonable to eagerly wait for the next-gen Xiaomi Redmi Note 6. Just recently, the latter leaked in a few spy photos, showing it’s already ready to hit the market. And though the manufacturer hasn’t issued any statement concerning this phone, it appeared in another spotted photo as well. 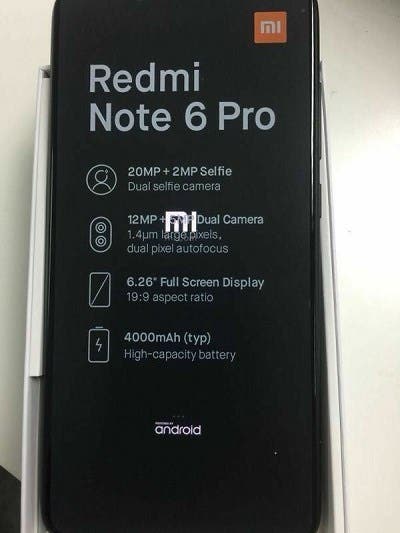 We know, on September 19, Xiaomi will hold a new product launch conference, where the company will uncover the Xiaomi Mi 8 Youth Edition and the Xiaomi Mi 8 Screen Fingerprint version. As the alleged Xiaomi Redmi Note 6 has spotted for a few times, there is every reason to think this handset will attend the event as well.

By the way, this is the Xiaomi Redmi Note 6 Pro and not the original model. From the photo, we can see it will be packed with a dual-camera both in the front and in the back. But if the front camera uses a 20MP + 2MP sensors combination and hints at its selfie-centric nature, the back camera comes with a 12MP + 5MP sensors combination.

As the film on the Xiaomi Redmi Note 6 Pro shows, the phone will be packed with a 6.26-inch full-screen with an aspect ratio of 19:9. Plus, under the hood, it will carry a 4000mAh battery as well as a 4+64GB memory combination.

The chin on the bottom is way narrower than that of many mid-range smartphones available on the market. So we can say the Xiaomi Redmi Note 6 Pro will sport a more attractive design than its rivals.

Next Guess Which Phone Brand Has The Highest Profit Share!

Save few bucks for the Xiaomi phones with our Coolicool coupons

Xiaomi Redmi Note 6 to launch in India on November 22