Xiaomi will launch the modified version of the Mi 8 SE on September 19. As you know, this model is called the Xiaomi Mi 8 Youth Edition, and one of the changes refers to the mirror glass body. The rest of the features are almost identical to the Xiaomi Mi 8 SE, which has been known as a pseudo-flagship smartphone due to the Snapdragon 710 placed under the hood. But today, the manufacturer released an interesting video on its Weibo account that hints at another smartphone. As the video says, ‘there will be a new smartphone with a more accurate pressure fingerprint recognition.’ This sentence made many users think there will be the Xiaomi Mi 8 Screen Fingerprint version. 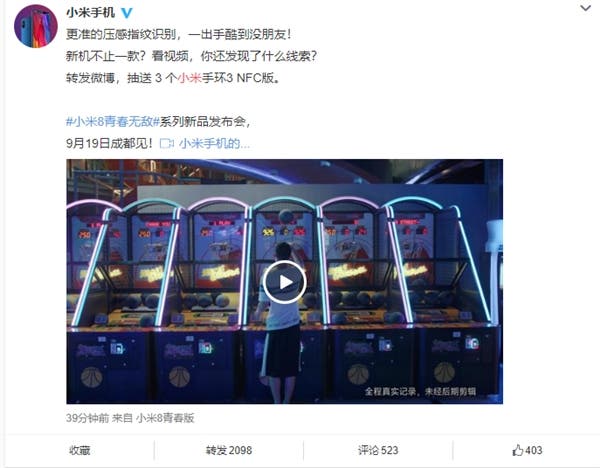 At this moment, there are three Mi 8 series smartphones in face of the original model, the Mi 8 SE, and the Mi 8 Explorer Edition. But only the latter sports a screen fingerprint module. As for Xiaomi’s rivals, VIVO has managed to release a few devices with an identical feature. They are the VIVO X20 Plus UD, the VIVO X21 UD, the VIVO NEX S, the newly announced VIVO X23, and the VIVO V11 Pro. The Meizu 16 and its larger variant adopt this technology as well. The Huawei Mate RS Porsche Design uses an on-screen fingerprint technology too.

As you can see, this technology will become a mainstream in a few months. So if Xiaomi wants to stay afloat, it should bring it to more devices. The Redmi family handsets can’t get it because of their price range/philosophy. In this sense, the Mi line models are the only option.

However, there is no hint whether the assumed Xiaomi Mi 8 Screen Fingerprint version will sport the same specs as the original model or not. So we tend to think the rest of the features will remain unchanged.

Previous OnePlus to expand into the TV market, OnePlus TV tipped for 2019 release