The new Huawei Mate 20 series is planned to be showcased on 16th of October, in London. It is already well known that the Mate 20 Pro, Mate 20X and Mate 20 Porsche Edition could very well be announced at the very same event. One of the most recent leaks has now confirmed a very interesting features of the device. Now, this very well should not come as a surprise but since it has been in the real of rumours, the new official poster leak clears things once and for all. The Mate 20 will be getting 40W fast charging.

As the picture depicts, the phone will be consisting of a marvellous broad angle triple camera paired in a unique square module and a 40W swift charging rivalling OPPO’s VOOC. In addition to that, it will feature Huawei’s home-made flagship 7nm chipset, the Kirin 980. 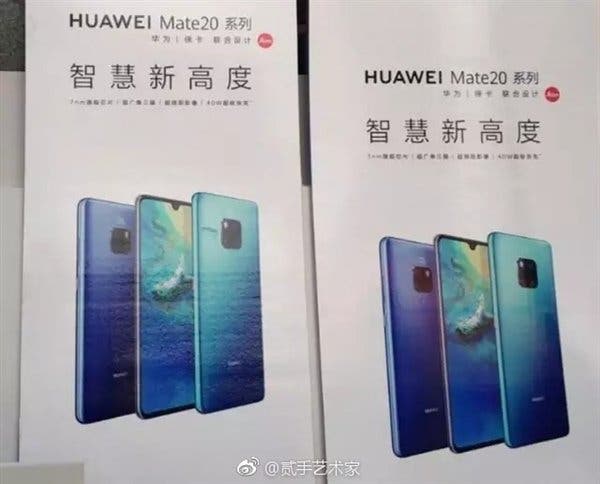 If you can read Chinese well, you’ll see very well that the poster advertises some key features – super wide-angle triple camera, super macro photography and 40W superfast charging. The Huawei Mate 20 can be seen from the image with a waterdrop display and the other ones are Mate 20 Pro without the rear-fixed fingerprint scanner. Moreover, the handset is believed to come with an in-display fingerprint sensor. As for the battery size itself, the Mate 20 and Mate 20 Pro are likely to have 4,000mAh and 4,200mAh battery respectively. With the power of 40W fast charging, Mate 20 Pro takes only half an hour to complete 70% of the battery.

Lastly, Huawei could be releasing its new Watch GT smartwatch alongside the Mate 20 series tomorrow.