Lenovo is widely expected to unveil the Lenovo Z5 pro in a couple of hours from now. And while Lenovo’s  VP is still releasing image teasers of the device, a new Lenovo smartphone suspected to be the Lenovo Z5 Pro has now surfaced on the Geekebcnh site and on China’s 3C (Compulsory Certification of China) certification website.

The alleged Lenovo Z5 Pro bears the model number Lenovo L78031 and has been given the nod by the 3C certification body as well as on the Geekbench database. Both Geekbench and the 3C listing suggest the device could be a high-end one as it is seen with support for up to 18W fast charging. While we had expected Lenovo to stuff the Lenovo Z5 Pro with the flagship SD 845 SoC given the hype it has received, the Geekbench listing suggests it could come with the Snapdragon 710 and 6 GB of RAM. Again, and quite disappointing, the alleged Lenovo Z5 pro as per the Geekbench listing will boot Android Oreo out of the box, even though the Android Pie has been around for a while now. 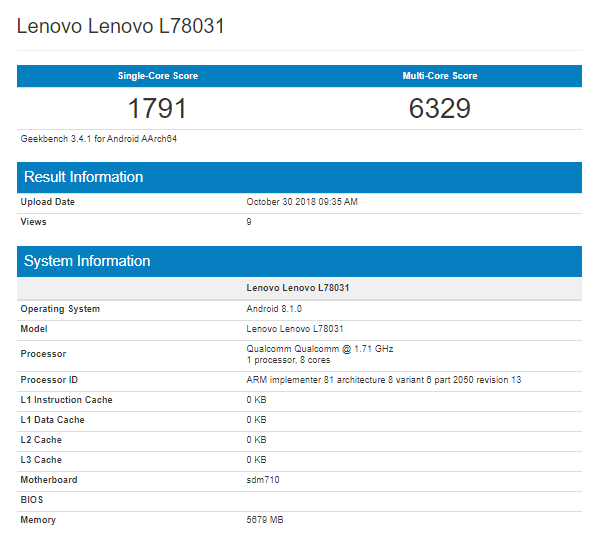 The Lenovo Z5 Pro will arrive as a true successor to the Lenovo Z5 released earlier this year, and it is tipped to come with a massive screen-to-body ratio and slider form factor similar to the Xiaomi Mi Mix 3 and the Honor Magic 2 due for release later today.

Next Nubia X With a Dual-Screen Design Announced, Starting at 3299 Yuan