Huawei’s Kirin 980 is the first publicly announced 7nm process mobile chip. TSMC’s foundry integrates as many as 6.9 billion transistors, but the core area of this chip has been kept under wraps. We only know that it is less than 100 square millimeters, which makes it easy to think that it will about 90+ square millimeters. Now, ChipRebel has released a kernel photo of the Kirin 980, and finally opened up a lot of internal secrets.

First of all, it can be confirmed that the core area of Kirin 980 is only 74.13 square millimeters, which is not only much smaller than the officially given range but it is 30% smaller than Kirin 970 (96.72 square millimeters). It can be seen that TSMC 7nm is really powerful. AnandTech also draws the distribution of different modules based on the kernel: 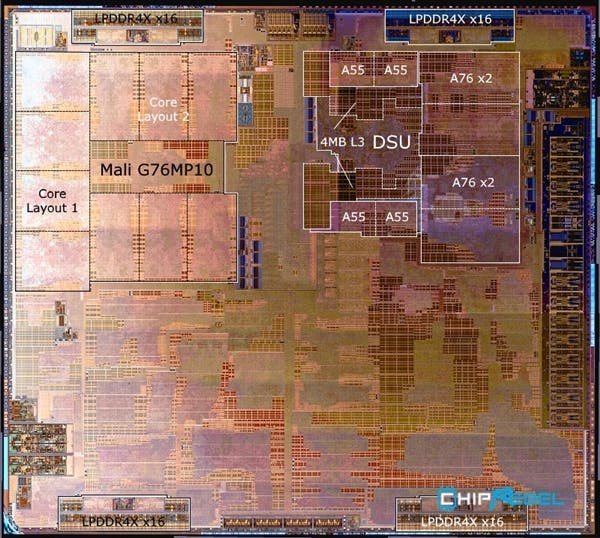 Note that the A76 core is divided into two groups. The physical layout of each group is obviously different. There are separate voltage and frequency control layers, which are optimized for high and low frequencies. Among the eight CPU cores is the DSU, which is the DynamIQ Share Unit, and the 4MB L3 cache. In addition, you can see four sets of LPDDR4X memory controllers, but the two NPU neural network unit cores can’t be found.

Next Apple to further cut down the production of iPhone XR