As Huang Zhang has previously said in the Meizu community, the next generation of Meizu 16th will be named the Meizu 16s instead of the Meizu 17. There are too many selling points for the Meizu 16th. But the most attractive of them is that we are dealing with the cheapest Snapdragon 845 smartphone. What’s more important, for this reason, the company didn’t cut other key features. As a result, the Meizu 16th could stand out and win users’ hearts. As for the upcoming model, there is every reason to think it will be packed with the next-gen Qualcomm Snapdragon chip and maintain the same price policy. 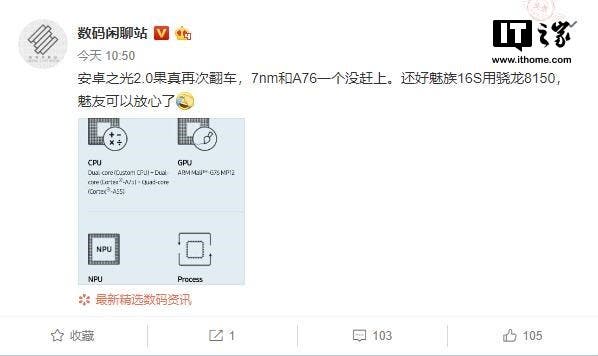 According to ‘Digital Chat Station’, Meizu 16s will be equipped with the Qualcomm Snapdragon 8150 processor. Previously, we learned Qualcomm will no longer use the three-digit name concept, switching to the four-digit naming concept. In other words, this is the same Snapdragon 855 we have talked about much.

It is going to be officially announced in December in Taiwan and commercially become available from the first quarter of next year. According to previous reports, the Snapdragon 8150 will be built using a 7nm process, with a chip size of 12.4mm x 12.4mm, and four 2.6GHz cores and four 1.7GHz cores that are semi-customized based on the A76+A55 architecture.

By the way, today, the Snapdragon 84 was leaked in the GeekBench database. According to the spotted screenshot, it has an obvious advantage in terms of single-core and multi-core performance. This SoC will be capable of providing way better performance due to the TSMC’s 7nm FinFET process as well as the independent NPU. The latter will greatly improve the AI performance in comparison to the current AIE.