Besides the Galaxy S10 series, the Galaxy M series and the Galaxy A 2019 series, it appears that Samsung has a Galaxy tablet in the works that might see the light of the day as early as next month. While there isn’t any official hint to suggest so, Sammobile had back in 2018 reported that the Korean is working on several new Android tablets, some of which could be unveiled at the Mobile World Congress 2019 in Barcelona next month.

Now, with a few weeks to the MWC 2019, a new and unannounced Samsung Galaxy tablet has surfaced on the Geekebnch database. Stamped with the model number SM-T515, the Galaxy tab returned a decent score of 1283 points in the single-core test and a multi-core score of 4017 points. 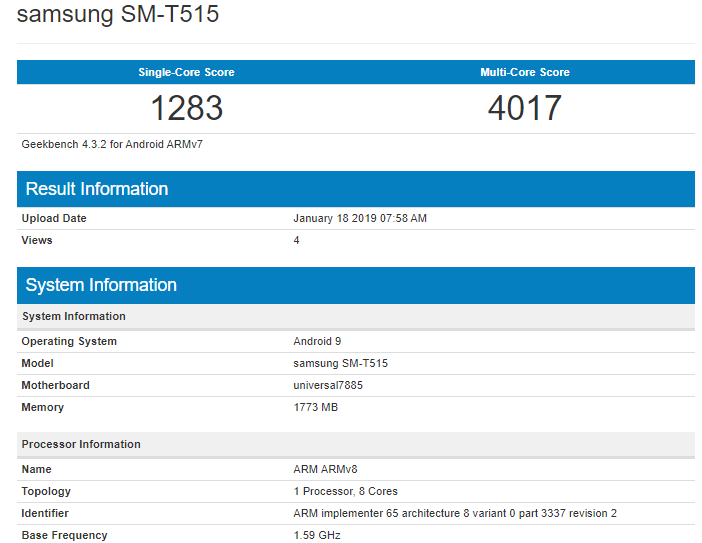 Under the hood of the Galaxy Tab is Samsung’s in-house  Exynos 7885 octa-core SoC, and unfortunately, it is coupled with a mere 2GB RAM, while on the software side of things, the tab will boot the latest flavor of the Android OS out of the box – Android 9.0 Pie.

So far no details have been revealed regarding the upcoming Galaxy Tab, however, there are murmurs that the device might launch alongside the Galaxy S10 at next month launch date.