The Vivo V15 Pro is turning out to be quite a beastly mid-ranger, as far as leaks have pointed out 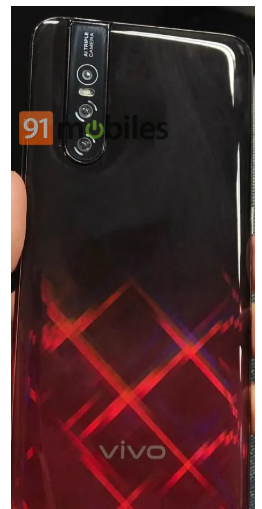 so far. India launch dates have already been out and we’ve had some substantial specs leaks and images as well but here’s a live image of the handset that hasn’t been pictured in the flesh earlier. Even though we’ve seen an image of the handset before there are some new details that the new leaked image reveals about the handset.

The leaked image of the Vivo V15 Pro, as reported exclusively by 91mobiles only shows the rear of the device. We get to look at the triple camera setup closely. The exact quality of the sensors isn’t known as of yet but previous leaks hinted at a 48MP + 8MP + 5MP combo. The primary sensor is thought to be a Samsung GM1 sensor. Another new highlight is the eye-catching glittery square checks which seems somewhat a similar trait to the Honor View 20’s back.

Other key highlights include a pop-up front camera with a 32MP sensor,  a Snapdragon 675
SoC and a sub-Rs 30,000  price tag which make the handset a lethal mid-range device, at least on paper. The launch is on February 20 while pre-orders begin on 15th next week.

Previous LG to stick with its smartphone business despite huge losses

VIVO V15 Pro Is About To Land In Thailand