Every smartphone maker has at least one series that represent the company’s spirit. For ZTE, it’s the AXON line. Though this brand has had some difficulties in 2018, it managed to release the ZTE Axon 9 Pro in November last year. Gone those days when the Qualcomm flagship chips were appearing only on selected models. The mentioned model was packed with last year’s top-end chip, namely the Snapdragon 845. Its successor that is said to be called the ZTE AXON 10 Pro is expected to hit the market soon. And from the previous leak, we know it will be packed with the next-gen high-end Qualcomm mobile processor, the Snapdragon 855. Today, 91mobiles reported the phone has passed the EEU (Eurasian Economic Union) certification, which simply means it is almost ready and will land in this market in the nearest future. 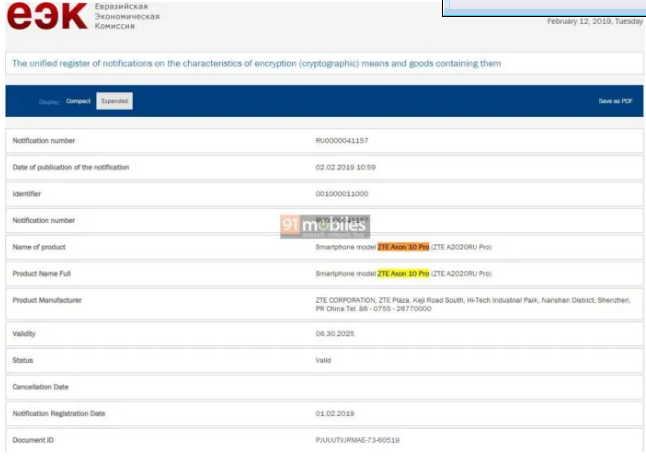 Previously, we have seen the ZTE AXON 10 Pro spotted in the GeekBench database under the model number of A2020 Pro. As for now, this device has been certified in Russia by the Eurasian Economic Union, which clearly states that the ZTE A2020 Pro will arrive in the market as the ZTE AXON 10 Pro. Unfortunately, the listing hasn’t revealed anything about the key features of the device.

However, we assume it will be among the first smartphones to be packed with the Snapdragon 855 chip. In the single-core and multi-core tests, the ZTE AXON 10 Pro scored 3824 points and 10762 points, respectively. Thus, it exceeds the upcoming Samsung Galaxy S10 Plus, which showed 3413 and 10256 points in similar tests.

Next Xiaomi schedules a major announcement for tomorrow