Redmi – the new Independent Xioami sub-brand will in about 24hrs from now unveil the  Redmi 7 in China. A lot has leaked about the device, while TENAA has spilled the beans on much of its specs, and now just a few hours to the official launch, the device has surfaced on the Geekbench database with a few more info about the upcoming device.

The Geekbench listing says the Redmi 7 will be powered by Qualcomm ‘msm8953’ chipset, pointing to a Snapdragon 625 which fully contradicts a leak from earlier this month. As per a leaked youtube video from 2018, the Redmi7 was spotted running the Snapdragon 632 SoC which is at least a good step up from the MediaTek SoCs used by the company the last time around. The Snapdragon 632 SoC is a 14nm chip clocked at 1.8GHz and has an Adreno 506 GPU. This is the same SoC that is expected to power the Nokia 6.2. although the same SoC also featured in the Moto G7 Geekbench listing but was launched with the Snapdragon 625.

Fitted with a dual rear camera and a circular fingerprint scanner, leaked images and renders of the Redmi 7  appears to be similar to the Redmi Note 7 and the Redmi Note 7 Pro. The device will come in varieties of colors as eight hues were reported in the TENAA listing including black, red, blue, pink, white, green, purple, and grey. There’s a 6.26-inch HD+ display powered by a 3900mAh battery and a dual  12MP+8MP dual camera resides on the back of the upcoming handset. 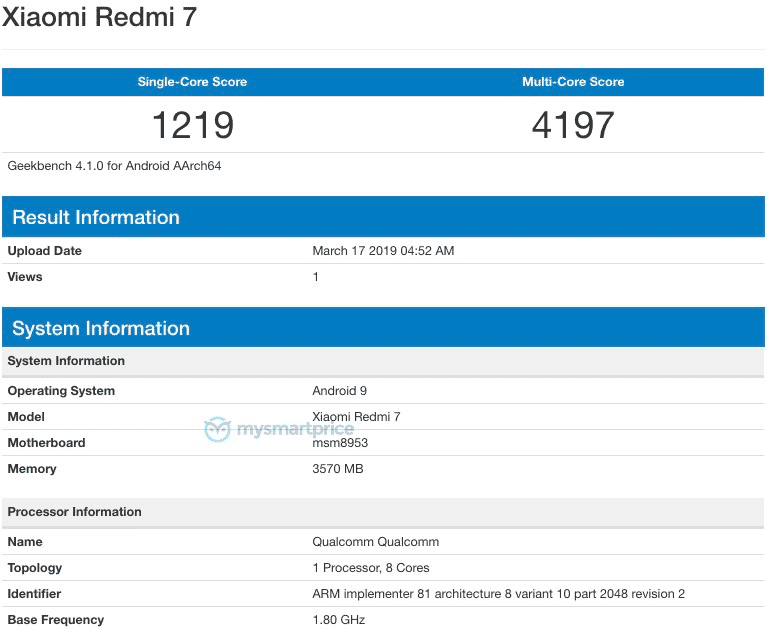 Although not yet official, the company’s CEO had earlier hinted the Redmi 7 will be priced between 700 Yuan and 800 yuan which roughly translate to Rs $100 to $120.