Mere days before its official launch in India, Xiaomi’s next budget-friendly smartphone and the next device in its Y series – the Redmi 3 has appeared on the Geekbench database, offering an early look at what to expect.

With a 1,236 score in the single-core test, and 4,213 in the multi-core test, the Geekbench lists the Redmi Y3 as using Qualcomm’s “msm8953” chip – the SD 625, the same chipset the Benchmark site listed for the Redmi 7, although the Redmi 7 ended up hitting the shelves with the SD 632, so it is likely there is a miss up in the listing. The Redmi Y2 launched with the SD 625, so a bump from that SoC to something higher is inevitable. Furthermore, the Geekbench listing suggests the device will get 3GB RAM and will ship with Android 9.0 Pie-based MIUI 10 out of the box.

Redmi recently revealed the phone’s design in a video ad, wherein it subjected the device to a few drops to ascertain if it can withstand quite a few bumps and bruises if and when it drops. 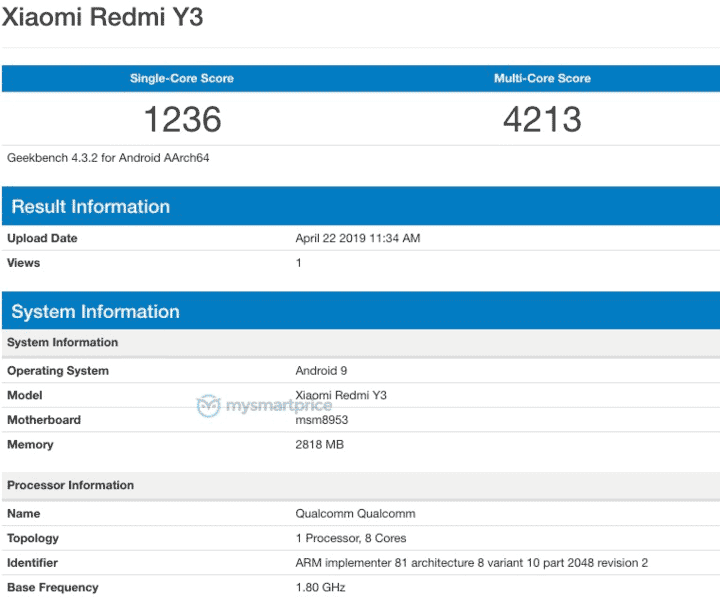 The Redmi Y series is the firm’s camera focused series and while the previous generation (Redmi Y2) came with a 16Mp front camera, the Redmi Y3 is set to launch with a 32MP front camera which makes it the first smartphone in the Redmi lineup to use a 32MP front camera sensor. The camera details remain scarce, however, there are speculations it might use Samsung’s 32-megapixel ISOCELL Bright GD1 sensor that was announced back in October last year. Previous teasers from the company’s official Twitter handle confirmed the device will come fitted with a 4,000mAh battery that is touted to last at least more than a day.

A recent tweet from Redmi India suggests the Redmi Y3 will launch alongside one more device, perhaps the Redmi 7.

Previous The company behind the YotaPhone files for bankrupcy