We’re already aware of the fact that Samsung is working on its mid-range 5G smartphone to be launched under its popular Galaxy A-lineup. Yes! we’re talking about the much anticipated Galaxy A90 5G. As the name suggests, Samsung Galaxy A90 5G is going to be the top member of the series flaunting 5G carrier support. Thanks to the previous leaks and renders, we pretty much know everything about the device leaving nothing to the imagination. The Galaxy A90 is expected to come with flagship-grade hardware packed inside a premium casing. Well, the smartphone has now popped up on the WiFi Alliance website. This new finding hints that the launch might happen sooner than we expected. 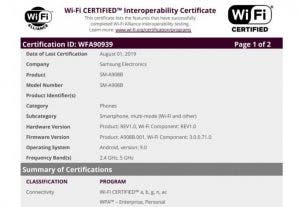 As per the emerging report, a smartphone with the model number SM-A908B surfaced on the WiFi Alliance website indicating that the Galaxy A90 5G has finally received its WiFi certification. The new listing indicates that the smartphone will run on Android 9 Pie software with support of dual-band Wi-Fi 802.11 ac. If you look at the model number carefully, you will notice the addition of B alphabet at the end. This suggests that the device might also be available globally. Apart from these small details, the certification doesn’t reveal much about the device. For those who’re unaware, Samsung Galaxy A90 5G passed through the GeekBench test revealing some key hardware details.

Based on the GeekBench listing, Samsung Galaxy A90 5G is going to run on the Qualcomm’s flagship Snapdragon 855 chipset with blazing-fast 5G capabilities and 6GB of RAM. We should see more RAM and storage variants during the official launch. Some previous leaks point towards a massive 6.7-inch Infinity-U Super AMOLED display with a resolution of FHD+. The 4G variant with the moniker SM-A905 will also come with the same display having a higher resolution. In terms of imaging, we’re expecting a triple camera module at the back consisting of 48MP primary sensor, 12MP wide-angle lens, and 5MP depth-sensing unit. Also, we might not see the slider design which we previously thought. All of these would be fueled by a massive 4,500mAh battery with the support of 45W fast charging.

Since the smartphone has now appeared on the WiFi Alliance for certification, the device might see its official launch quite sooner than we anticipated. Moreover, the smartphone is expected to hit the US as well as various popular international markets. This includes the European market such as the UK, Germany, France, Scandinavia, and Italy. As expected, the device will also hit Samsung’s home market, South Korea. As of now, we don’t have information on the pricing and whether the device will head over to the Indian shore. Since the launch is nearing, we might see more leaks and information to surface online.