In January this year, Xiaomi’s sub-brand, Redmi, went independent and since then it has unveiled a couple of smartphones. A couple of months ago, the company released its first flagship smartphone – Redmi K20 Series. At the time, the Redmi K20 Pro comes with up to 8GB of RAM and 128GB of internal storage. Now, an official poster shows that the Redmi K20 Pro Exclusive Edition will come with 512GB of internal storage. 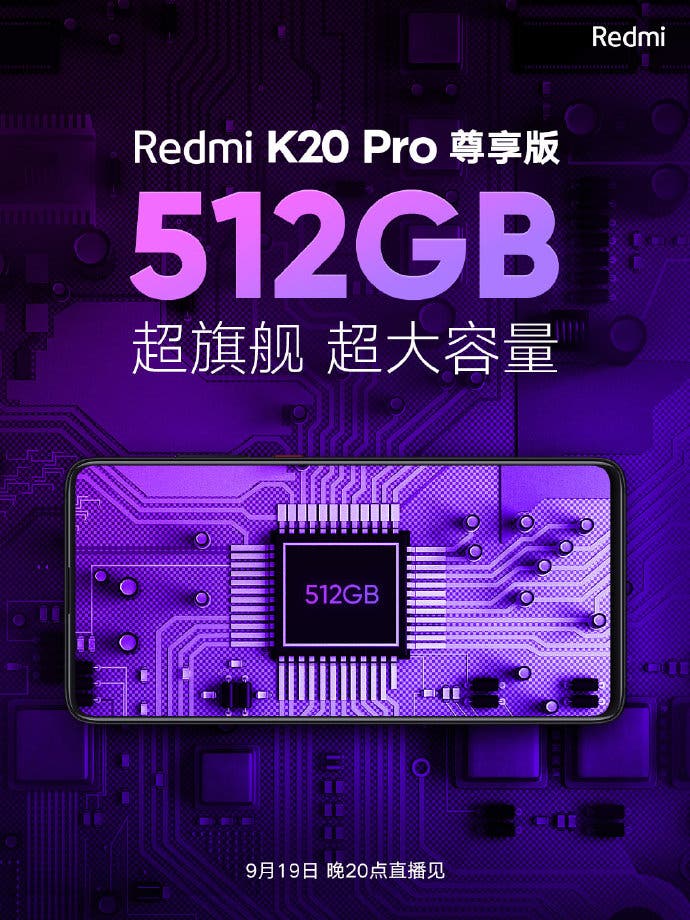 At present, there is only one Xiaomi Phone with 512GB storage. This is the Xiaomi BlackShark 2 Pro Gaming Phone which uses  12GB of RAM + 512GB storage. It sells for 3999 yuan. The Redmi K20 Pro Exclusive will be the first phone in the Mi/Redmi lineup to use 512GB storage capacity.

According to previous information, the Redmi K20 Pro Exclusive Edition will come with the Qualcomm Snapdragon 855+. Presently, the K20 Pro uses a 6.39-inch full-screen display with a resolution of 1080 x 2340 pixels. Under the hood, there is a Qualcomm Snapdragon 855 processor with up to 8GB of RAM and 256GB of internal storage. This smartphone uses a 20MP pop-up front camera with a 48MP+8MP+13MP triple rear cameras. The lights of this device are kept on with a 4000 mAh battery.

Next Realme X2 will come with a 32MP front camera