Back in July, right after the unveiling of the SD 855+, Oppo’s sub-brand Realme took to Weibo to welcome the new chipset with a subtle hint that it is working on a phone that will feature the Snapdragon 855 Plus. Its been a couple of months since the SoC first arrived, and it would seem the brand hasn’t reneged on its promises.

While its major rival – Redmi already delivered a Snapdragon 855 Powered device, and now, Realme is said to be gearing up for the release of a Snapdragon 855+ as revealed as suggested by a current certification approval. Although no official confirmation to that effect, a new OPPO Reno phone – Realme RMX1931 with the SD 855 has finally made it through the Bluetooth Special Interest Group (SIG). 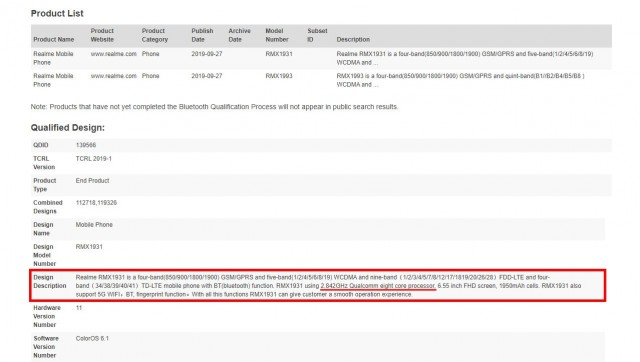 The listing, aside from the Realme RMX1931 model number surprisingly reveals a few key specs. First, it shows the device is powered by an octa-core CPU clocked at 2.84 GHz, and this is most likely the SD 855. Furthermore, it shows the device will come fitted with a 6.55-inch display with FHD+ resolution. Oddly, it gets a 1,950 mAh battery, that we assume is a listing error, while the rest of the specs include support for Bluetooth 5.0 support and dual-band Wi-Fi, and Color OS 6.

Notably, the same device already received the needed certification from Bureau of Indian Standards (BIS)  suggesting that the Realme device might not just be Chinese only affair.

Since the said Realme phone has cleared Bluetooth SIG certification process, we expect some more details to surface in the coming days, perhaps in the way of TENAA. 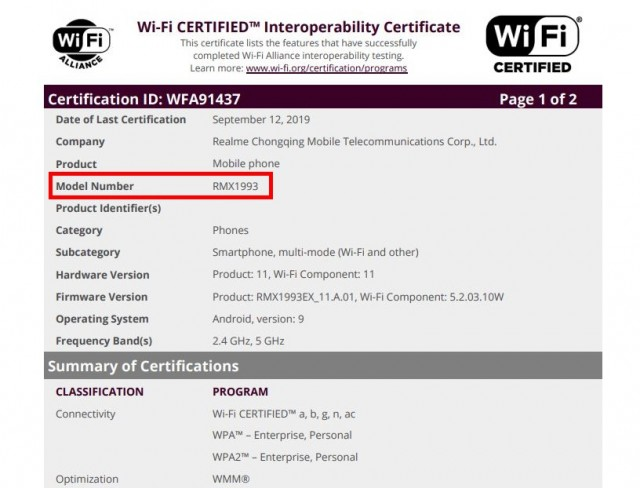 Similarly, a fresh Realme phone with RMX1993 model number is also in the offing as suggested by its appearance Wi-Fi Alliance. The listing reveals little or nothing, though there are speculations it could be the global variant of the Realme X2.