Samsung seems to be working on a new Galaxy A series smartphone. The Samsung Galaxy A31 device has allegedly received the US FCC certificate. This suggests that the smartphone is close to the launch, and we will get some intimation soon. The same Samsung phone was also recently spotted in the database of Geekbench. The Galaxy A31 has model numbers SM-A315F and SM-A315DS. These are reportedly the single SIM and dual-SIM variants.

The listing identifies the handset under the code name A3LSMA315GL, for the certification process. According to the description of the device on FCC (Federal Communications Commission). The dimensions of the smartphone comprise a 72mm width, 158.5mm length, and 168mm overall form diagonally. The Galaxy A31 has an EB-BA315ABY battery model name and is a standard Li-ion polymer battery with DC 3.85 V power supply. 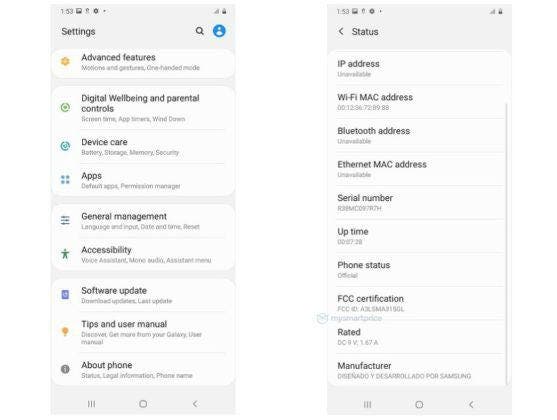 The report also leaked a screenshot for the Galaxy A31 smartphone, which revealed that it could come with some One UI 2.0 custom skin settings, including Advanced features, Digital Wellbeing, Device Care, Apps, general management, and more. The Galaxy A31 is likely to launch later this month and will run Android 10 OS out of the box.

As per the previous leaks and rumors, the Samsung Galaxy A31 could have by a MediaTek Helio P65 octa-core SoC. It may also come with 4GB of RAM with 64GB onboard storage. A dedicated microSD card slot for further expansion is also likely. In the camera department, it could boast a dual-camera setup at the back comprising of a 48-megapixel primary sensor and a secondary 5-megapixel macro sensor.

Upfront, there is likely to be a 25-megapixel camera for selfies and video calling. Connectivity options on the Galaxy A31 could also include WiFi dual-band, Bluetooth, 4G with VoLTE, and USB Type-C port. The device will further pack a 5,000mAh battery with quick charge support.

Previous Escobar Fold 2 is a SCAM! A Samsung Galaxy Fold with gold stickers

Next Huawei gets yet another 45-day reprieve from the US