The OnePlus Z has consistently been snatching the attention of smartphone enthusiasts this year. The smartphone has been doing the rounds on rumor mills for a while now. The latest update hints that the phone might launch as early as July 10 in India and come with a price tag of Rs.24,999.

What does the Survey say?

XDA-Developers spotted an Online forum’s thread where pictures of a PayBack survey about a new OnePlus device was posted. PayBack is a program that lets users store rewards from debit and credit card transactions in India.

The thread also reveals key specifications along with the price of the device. The screenshot below has the survey asking for users’ opinion about the pricing of an OnePlus phone at Rs.24,999. 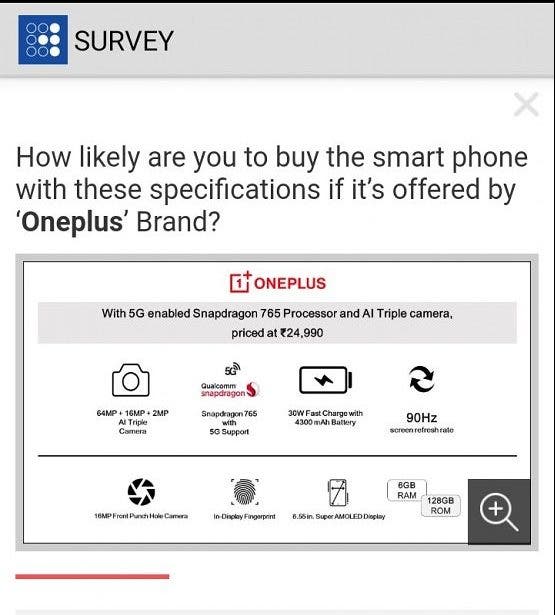 The survey also indicates the device will have a 6.55-inch super AMOLED display with 90Hz refresh rate, Qualcomm Snapdragon 765 5G SoC, 64MP+12MP+2MP triple rear camera and a 16MP selfie shooter in the front.

Further, the survey says the device will have an in-display fingerprint sensor, 4300mAh battery with 30W fast charging support and comes with 6GB RAM and 128GB storage. Though these specs remind us of the previous leaks, there is no concrete evidence to this whatsoever.

Interesting of the bunch, the price quoted in the survey is Rs. 24,990 which also goes in line with the company’s latest strategy. Regarding the launch, shortly after this report, Android Central claimed that their internal sources pointed to launch on July 10th.

Take this with a pinch of salt

However, popular tipster Max.J has now denied the news saying the leaked specifications of the survey are not true. He is a reliable tipster when it comes to OnePlus’ devices. Recently, he broke the news of the upcoming OnePlus TWS earphones.

Regardless of the discrepancies in the information that is available so far, this is definitely a welcoming change from the company before launching a spree of flagships these years. All in all, we would advise you to take these with a pinch of salt before getting some concrete info on the device.

Previous Android: Google Play Store is the home of thousands of malicious apps

Next Xiaomi Mi CC10 design unveiled by an accessory manufacturer