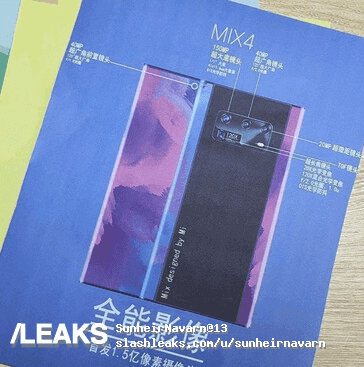 Anyways, for the Xiaomi Mi MIX 4, the Mi fans tend to think that it couldn’t adopt the surround screen design of the MIX Alpha. They think it should not get radical changes and should be more mass-producible and operable.

But we should recall a leak that appeared on the net a few days ago. The source claimed it refers to the upcoming Xiaomi Mi MIX 4. But it looks similar to the MIX Alpha. But we should also say this is not a 180-degree surround screen. It’s better to say the phone uses an enhanced version of the waterfall screen.

In terms of photography, the Xiaomi Mi MIX 4 should carry a 40-megapixel ultra-wide angle lens. But it’s still unclear whether the handset will use a hole-punch design or way more innovative under-screen camera solution. By the way, Xiaomi has a few times announced that this technology is not mature yet. But we also know the company is working hard to overcome this technology.

We talk about this because, for a surround screen handset concept, the in-screen camera technology is vital. When using the front camera, the screen on the camera will become transparent, allowing the light to fully enter and providing imaging. At the same time, it also said that this is a new technology of Xiaomi’s independent intellectual property rights. The front camera is placed under a specially customized screen. The latter has the characteristics of low reflection and high light transmission. It does not have any difference from the normal screen when not taking pictures. Other information is displayed normally.

Anyways, the main camera module adopts a rectangular shape. The main camera sensor will have a 150MP resolution. But apart from this, there will be a 40MP super wide-angle lens, a 20MP super macro lens, and a telephoto lens (20x optical zoom, 120x composite zoom), and a ToF lens.

Interestingly, there were reports saying the Xiaomi Mi MIX 4 will come with a 120Hz refresh rate screen. And most likely it will be AMOLED.