Realme’s mysterious new 5G smartphone has hit the radar once again, this time with interesting details. The listing on TENAA reveals the device could have an OLED screen and a dual-cell battery that is found on the Oppo’s flagship smartphones.

New camera layout, but not the one we had in mind

Chinese certification authority TENAA has listed a new Realme phone with the model number RMX2121. As said by Madhav Sheth in a recent interview, the device has got the revamped square-shaped camera cut-out. It reminds us more of the recently launched Samsung A31, however, the fourth camera and flashlight are swapped here.

Previous Realme devices including the recently launched Realme X3 SuperZoom in Europe have followed the same old vertically stacked quad-camera design but the newer layout is refreshing, to say the least. On the front, there is a single punch-hole cut-out for the selfie camera.

While the listing has just mentioned 6.5-inch screen, a tipster from China says it could be an OLED screen. Further, the unannounced Realme phone will have a dimension of 160.8×75.2×8.5 mm which is slightly lesser compared to the X3.

There is a power button to the right and a mysterious circular button on the left. No sign of the fingerprint sensor makes us believe that it could have an OLED screen and in-display sensor. 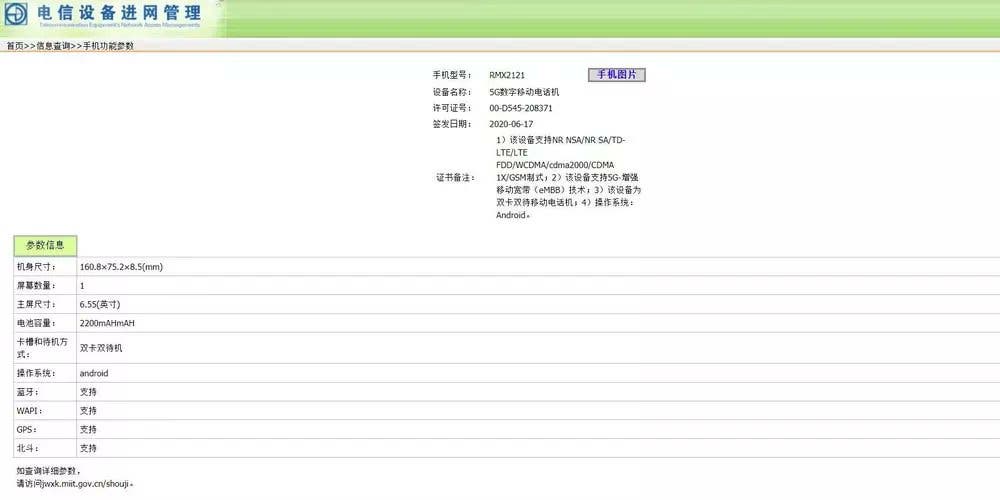 Interestingly, the tipster says the device will have a dual-cell battery with a capacity of 4,500mAh which falls in-line with the listing revealing each battery having a capacity of 2,200mAh.

Once a parent company of Realme, Oppo did this to optimize the battery according to its 65W charging technology and avoid overheating. Realme which still uses Oppo’s resources could very well borrow the design for better thermals.

To affirm our guess, the tipster has also said the new Realme device will sport the 65W charging technology. While this is just an early claim, let’s wait for more words on this.

Lastly, the listing says the device will support both NSA/SA 5G network which is a no brainer as the company earlier said its future devices in China will be 5G ready. Apart from this, the device also has backward compatibility of LTE, GSM and CDMA networks.

While the listing specifies ‘Android’ there is no mention of the version. But we can expect the device to run on the latest Realme UI based on Android 10. Apart from this, there is no other information and looks like we will have to wait a bit further to discuss more about the device.