An official announcement from Huawei states that Huawei Developer Conference 2020 will hold from September 10th to September 12th. According to Huawei’s official Weibo handle, it will share the latest developments of HMS Core 5.0. It will also unveil the mystery of HarmonyOS and EMUI 11. The company promises exciting new technologies, in-depth exchanges, and learning opportunities. 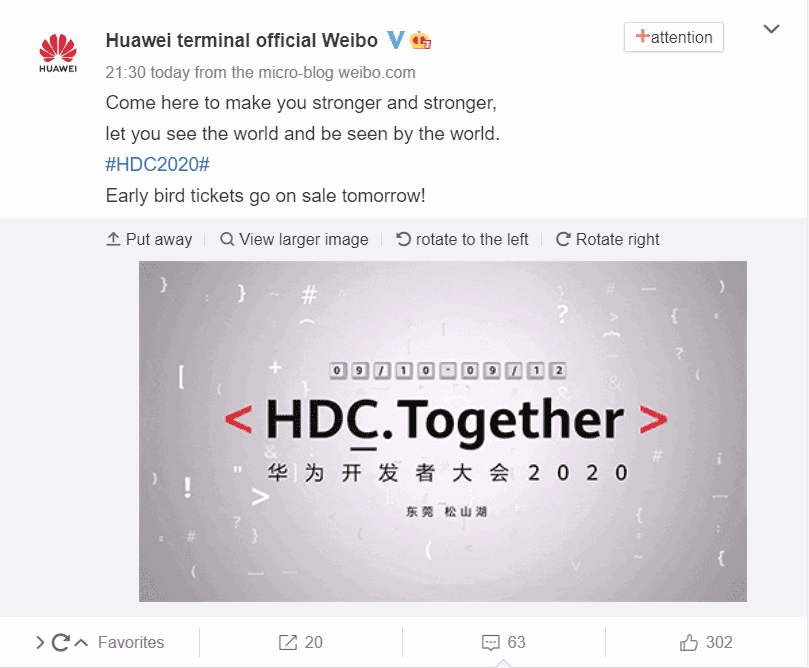 In 2020, 5G and AI will accelerate, and the era of intelligent interconnection will come quietly.

HarmonyOS will break the boundaries of communication, and the full-scene smart experience is now within reach.

A global service network helps developers embrace the world. Build a new ecology and draw a new life together.

May top Huawei executives will be part of the Huawei part of the event. Although we will not have Ren Zhengfei, we have the likes of Yu Chengdong, Wang Chenglu, Zhang Pingan, and Shao Yang in attendance. According to “Science Innovation Board Daily”, at the Huawei Developer Conference 2020, the iterative Harmony 2.0 will be official. This will be a system for PCs, smartwatches as well as cars. Nevertheless, HarmonyOS is just not ready for smartphones.

HMS core 5.0 opens up a lot of new grounds for Huawei

Recently, Huawei rotating CEO, Xu Zhijun, wrote a report with the title “Building the world’s third intelligent terminal ecosystem –  turning impossibility into possible”. The confidentiality level of the report is “internally open”. According to Xu Zhijun, HMS core 5.0 opens up a lot of new grounds for Huawei. He also believes that the new system will be beneficial irrespective of country and region.

Recall that in last year’s Huawei Developers Conference, the company officially unveiled its own operating system. Many people know this system as HongMeng or HarmonyOS. However, the HarmonyOS is simply the English version of HongMeng (Chinese version).

Early bird tickets for the Huawei Developer Conference (HDC) 2020 will hit the shelves tomorrow. According to Huawei, attending the event will make anyone stronger. Obviously, the company has a lot to unveil. However, we can not tell the exact impact that these new releases hold.