.Modularity in phones has so far been limited to attaching a speaker, charger to a smartphone. However, Xiaomi is looking to take it to a whole new level. It has patented a display that can be detached from the shell of the device and probably used wirelessly.

The patent, as identified by LetsGoDigital, has been published today in China’s Intellectual Property Administration(CNIPA). It seems to be applied on March 31, 2020. Xiaomi has sketches of the two-part mechanisms with nearly 22 product images in it.

Speaking of which, the device has two parts- the main ‘body’ part and the detachable ‘screen’ part. The body part seems to be thicker than the screen which is obvious. But the interesting part is the full-screen display without a punch-hole or pop-up cutout for the cameras. It’s also likely that the display would have its own battery but that isn’t clear here.

This makes us believe that the device might sport an under-screen camera solution. This is further revealed in the patent as the body without screen shows the dual-selfie shooters with a bigger cutout which could be an LED flashlight.

If this turns out to be true, it will be surprising to see how Xiaomi implements the functionality of a flashlight beneath the screen.

Moving on, the rear display and the body’s front view in the patent reveals a pair of connectors each with 10 pins on them. However, it is not known what type of connector Xiaomi plans to use here to achieve the modularity.

Apart from this, there is a USB-C port, Speaker and Microphone grills at the bottom. There are volume buttons and a power button to the right while a SIM card tray is situated to the left. The rear of the device has a triple-camera setup vertically stacked with a flashlight beneath them. 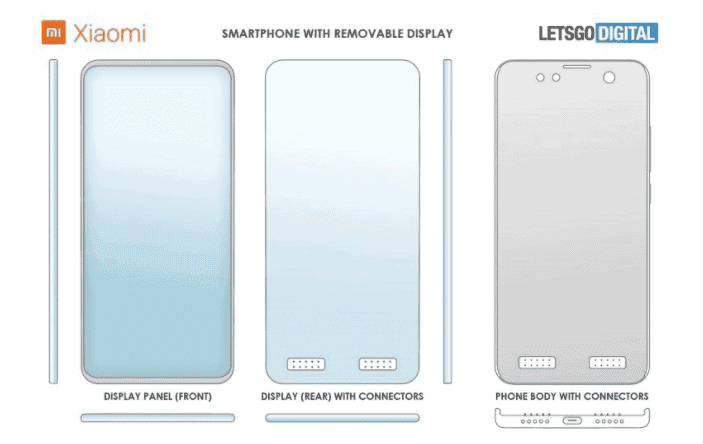 What could be the use of a detachable display?

That said, the exact intent of the patent is not known yet. The display when connected seems to be like every other smartphone but when detached, reveals the internals with cameras. However, LetsGoDigital says that the display could be wirelessly charged via a wireless connection to the housing but we aren’t sure about this yet.

All in all, the patent looks very interesting and while a detachable display is itself a hit or a miss, it could open doors of modularity features like using displays alone for longer phone calls (via Bluetooth), viewfinder for selfies while the body part acts as camera and more.

That said, not all patents see the light of the day. Let’s wait and see if Xiaomi proceeds with the design in the future.

Huawei begins a battle with Amazon over patent infringement