Xiaomi is getting ready for one of the biggest events of the company’s history. The company will be celebrating its 10th anniversary on August 11th and apart from Mi 10 and K30 Extreme commemorative editions, a new report says more products are coming.

GM of Xiaomi’s Public relations, Xu Jieyun, has shared details about the conference in a Weibo post. The virtual event will happen on August 11th at 19:30 China Time.  Xiaomi’s founder Lei Jun is expected to give a speech and recall the past journey. He will also his vision for the future of Xiaomi while launching a few products.

Will there be a Mi MIX at the event?

While he doesn’t exactly mention the products on the list, it is speculated that the company might announce the next iteration of Mi MIX at the event. While this is not certain yet, an upgrade to the MIX series is long overdue. And if Xiaomi pulls it off, it will be one of the most well-guarded phones of 2020.

That said, the already confirmed devices are the Mi 10 and K30 Extreme commemorative editions. The event is basically planned to recall the achievements and share the future vision of the company and expecting a Mix announcement is not that steep, to say the least. 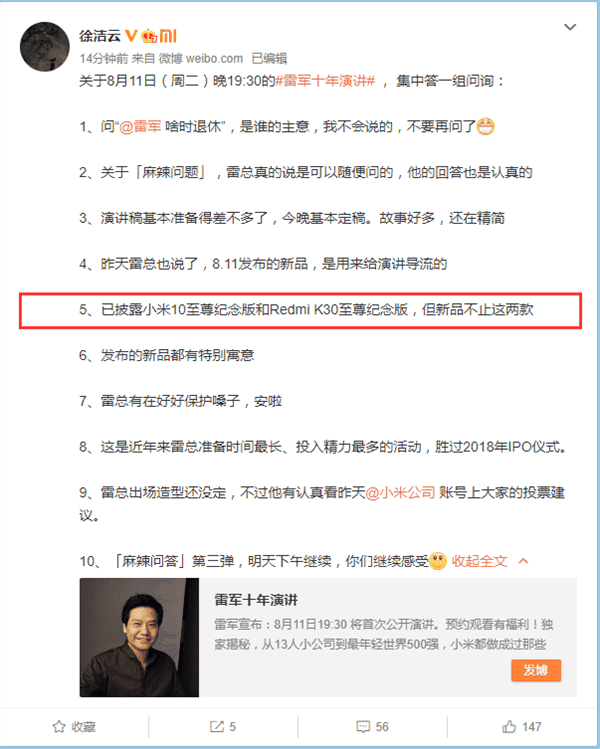 Xiaomi is well-known for surprising the audience

Back in 2019, Xiaomi out-of-nowhere unveiled the conceptual edition of the Mi MIX Alpha when all were expecting a Mi Mix 4. It had a futuristic design with a display covering almost the entire body with a near 100% screen-body ratio.

The next-gen Mi Mix has been a mystery till now but a few patents indicate that the company could have finally achieved a prototype that is ready for hitting the retail stores. However, nothing about the device has been leaked so far.

Further, Xu said that the new products released as a part of the event will have a special meaning and that’s evident in the posters for the Mi 10 and K30 extreme editions. Speaking of which, the Mi 10 Extreme commemorative edition is expected to have a 120Hz AMOLED display, Snapdragon 865, support 100W wired and 55W wireless charging.

The K30, on the other hand, is speculated to be the K30 Ultra that was rumoured a while ago. It could sport Mediatek’s Dimensity 1000+ SoC, have 64MP camera, 4500mAh battery with 33W fast charging. Nevertheless, we are sure to get more products on August 11th and let’s wait for a few days to know more about them.